Headlines
Redwan Rahman graduates from FilmdomThe local government minister has instructed to cut the road if necessary to remove the waterRequest to withdraw closure shop at night till EIDThe days of the Western monolithic world are over: PutinLeaders of Germany, France, and Italy in Kyiv to express solidarity‘Presidents of two countries call and pressurized Mbappé’Two U.S. citizens are thought to be missing or taken prisoner in UkraineCOVID: The technical committee suggested lifting some restrictionsPetrol prices hit record highs in the USCanada wants a stern warning against cigarettesThe task force to protect the mountains, demanded the formation of a speedy trial tribunalDepot fire: CID tries to find the cause on CCTVRussian passports are being issued in occupied UkraineFire on Parabat Express: Railroad to Sylhet is normal after 4 hoursAnother 24 children died in Mariupol, Ukraine said
Home Headlines Hundreds die in floods and landslides in India and Nepal
Facebook
Twitter
WhatsApp
Print 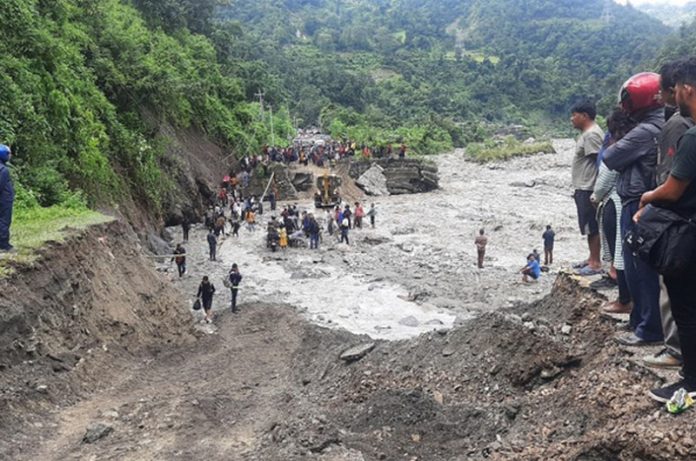 Md. Ashraful Islam: The death toll from nonseasonal rains, landslides, floods, and landslides has risen to 129 in the Himalayan country of Nepal and neighboring India’s Uttarakhand.

Many houses are half-submerged in water, settlements, roads, bridges have been damaged in the landslide.

Citing local officials, the BBC reported that the death toll had risen to 52 after six more bodies were recovered in Uttarakhand on Wednesday; Five of them are members of the same family.

Tourists have been banned from visiting the popular tourist destination of Uttarakhand. All schools have been closed. In Rishikesh, the water of the Ganges has infiltrated the locality and the Nainital area has also been badly damaged.

As seen in the video of the news agency ANI, one of the tourist attractions of Uttarakhand is the houses in the vicinity of Nainital Lake. Knee-high water is flowing over the road.

Thus, in October, Uttarakhand receives an average rainfall of 30.5 mm. This time there was a record of 328 mm rainfall in a single day.

Rainfall in India has started declining since Wednesday, according to the country’s meteorological department. However, rains continue in Nepal.

The worst-hit district was Panchathar in the eastern part of the country, where 24 people were killed. Besides, 13 bodies have been recovered in the western district of Ilam and 12 in Doti.

Twenty-two people have been rescued and are being treated at a hospital, while the Nepali government says at least 26 others are missing.

Nepal Police spokesman Basanta Kunwar said at least 60 people were trapped in the village of Seti, three hundred and fifty kilometers west of the capital Kathmandu, and rescue workers had not been able to reach them for two days due to inclement weather.

Nepal’s television has reported that crops have been submerged or washed away by water. The river flooded and washed away houses, roads, and bridges.

Such flash floods and landslides are seen in Nepal during the monsoon season. The country usually has such weather from mid-June to September. This time the weather has been similar in October.

According to the Nepal Meteorological Department, there is a possibility of heavy rain in some places and light to moderate snowfall in the eastern hilly areas for at least one more day.

Rains are also forecast in the southern Indian state of Kerala. The Indian Meteorological Office said heavy to very heavy rains were also expected in the western ghats and eastern hilly areas on Thursday.

According to the Indian Express, the first 19 days of October saw 135 percent more rainfall than normal.

Heavy rains, floods, and landslides have killed at least 26 people and destroyed 1,600 homes in the Indian state as of Monday.

Authorities are now evacuating residents at risk of landslides as heavy rains are forecast again. Chief Minister Pinarayi Vijayan has urged the residents of the riverside and hilly areas to exercise utmost caution.