Headlines
Redwan Rahman graduates from FilmdomThe local government minister has instructed to cut the road if necessary to remove the waterRequest to withdraw closure shop at night till EIDThe days of the Western monolithic world are over: PutinLeaders of Germany, France, and Italy in Kyiv to express solidarity‘Presidents of two countries call and pressurized Mbappé’Two U.S. citizens are thought to be missing or taken prisoner in UkraineCOVID: The technical committee suggested lifting some restrictionsPetrol prices hit record highs in the USCanada wants a stern warning against cigarettesThe task force to protect the mountains, demanded the formation of a speedy trial tribunalDepot fire: CID tries to find the cause on CCTVRussian passports are being issued in occupied UkraineFire on Parabat Express: Railroad to Sylhet is normal after 4 hoursAnother 24 children died in Mariupol, Ukraine said
Home More Environment In Dhaka, the wind speed is 63 kilometers per hour
Facebook
Twitter
WhatsApp
Print 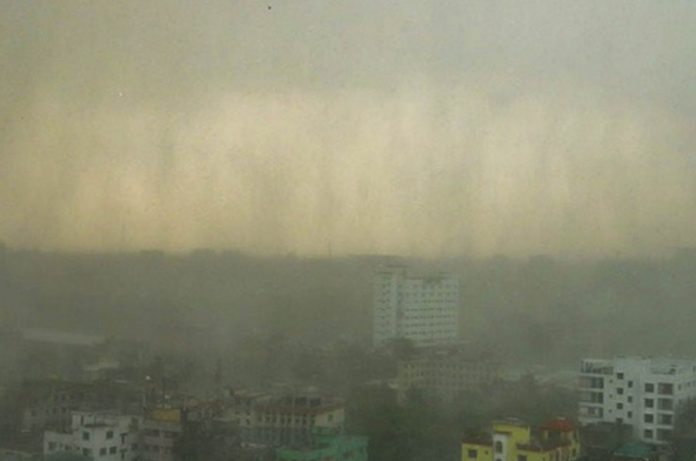 Senior Reporter: At noon on the second day of the Dhaka holiday, which was unbearably hot for two days, the level was ‘severe’ according to the meteorological office.

Meteorologist Shahinul Islam said the maximum wind speed in the storm in Agargaon area of ​​the capital after 3 pm was 63 kilometers per hour.

Last Wednesday morning, the first Kalbaishakhi of the season gave a little relief to the people of the capital. On that day, the wind speed rose to 60 kilometers per hour. Then again, that hot.

On Friday afternoon, the sky of Dhaka became dark with clouds. The gust of wind started around 3:30 pm. Kalbaishakhi brings hail and lightning.

In the heat of Boishakh in half an hour of rain, relief is coming into the life of the citizens. The meteorological office recorded 33 mm of rainfall in Dhaka at that time.

However, pedestrians, public transport passengers, and shoppers who go to the shopping malls to celebrate EID on holidays suffer. The sellers who are preparing to prepare iftar are in trouble.

Not only in Dhaka, but also in different parts of the country since noon on Friday. However, the meteorological office had predicted that the stormwater could happen.

Meteorologist Shahinul Islam said, “Now it is the rainy season, the weather is normal.” The rest of the day and even at night, there may be such weather somewhere.

The weather forecast for the next 24 hours said that some parts of Rangpur, Mymensingh and Sylhet divisions and a couple of places in Rajshahi, Dhaka, Khulna, Barisal, and Chittagong divisions may experience thundershowers and thundershowers as well as showers in some parts of the country. There may be scattered hail somewhere.

The highest temperature in the country was recorded in Rajshahi on Friday at 41.2 degrees Celsius. That heat is slowly dissipating in the storm.

Two to three mild heat waves or moderate heat waves may occur in some parts of the country during this month.