Headlines
Redwan Rahman graduates from FilmdomThe local government minister has instructed to cut the road if necessary to remove the waterRequest to withdraw closure shop at night till EIDThe days of the Western monolithic world are over: PutinLeaders of Germany, France, and Italy in Kyiv to express solidarity‘Presidents of two countries call and pressurized Mbappé’Two U.S. citizens are thought to be missing or taken prisoner in UkraineCOVID: The technical committee suggested lifting some restrictionsPetrol prices hit record highs in the USCanada wants a stern warning against cigarettesThe task force to protect the mountains, demanded the formation of a speedy trial tribunalDepot fire: CID tries to find the cause on CCTVRussian passports are being issued in occupied UkraineFire on Parabat Express: Railroad to Sylhet is normal after 4 hoursAnother 24 children died in Mariupol, Ukraine said
Home More Health In one day, 315 dengue patients were hospitalized
Facebook
Twitter
WhatsApp
Print 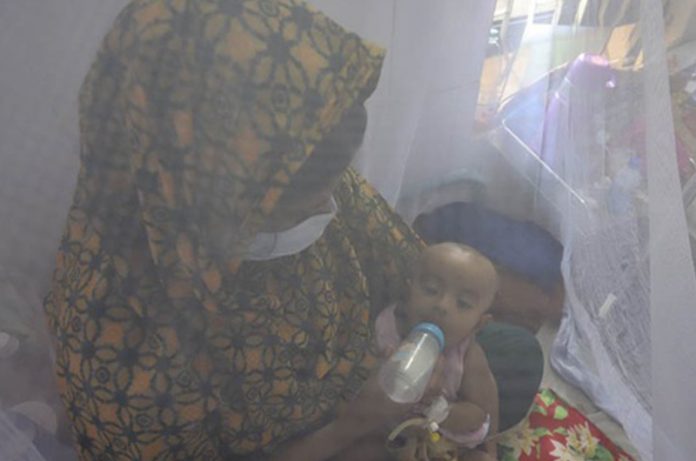 Staff Reporter: On the last day, 315 patients have been admitted to different hospitals in the country due to Aedes mosquito-borne dengue fever and one of them has died.

According to the Department of Health, 262 dengue patients were admitted to 41 government and private hospitals in Dhaka in the previous 24 hours till 8 am on Sunday. Another 53 people have been admitted to hospitals outside Dhaka.

On August 16, 329 dengue patients were admitted to various hospitals, which is the highest this year. At present, 1,260 dengue patients are undergoing treatment in different hospitals in the country.

In the first four days of this month, dengue has been detected in 1,480 people. At this time, 6 people have died of the virus.

Last August, a maximum of 6,797 dengue patients went to the hospital this season. And 34 people died of dengue.

According to the Department of Health, no dengue patient has died in the first six months of this year. However, the number of patients has increased since July and 52 people have died in the last two months.

This year, 11,618 dengue patients have come to the hospital for treatment. Of them, 10,471 have recovered and left the hospital.

In 2019, more than one lakh people were infected with dengue in Bangladesh, the highest number of deaths due to the virus.

That year, the IEDCR reviewed 28 deaths from various hospitals and confirmed 146 dengue deaths.

The following year, it dropped sharply to 1,405 dengue patients.