Headlines
Redwan Rahman graduates from FilmdomThe local government minister has instructed to cut the road if necessary to remove the waterRequest to withdraw closure shop at night till EIDThe days of the Western monolithic world are over: PutinLeaders of Germany, France, and Italy in Kyiv to express solidarity‘Presidents of two countries call and pressurized Mbappé’Two U.S. citizens are thought to be missing or taken prisoner in UkraineCOVID: The technical committee suggested lifting some restrictionsPetrol prices hit record highs in the USCanada wants a stern warning against cigarettesThe task force to protect the mountains, demanded the formation of a speedy trial tribunalDepot fire: CID tries to find the cause on CCTVRussian passports are being issued in occupied UkraineFire on Parabat Express: Railroad to Sylhet is normal after 4 hoursAnother 24 children died in Mariupol, Ukraine said
Home Headlines India is burning with intense heat, flying birds are falling
Facebook
Twitter
WhatsApp
Print 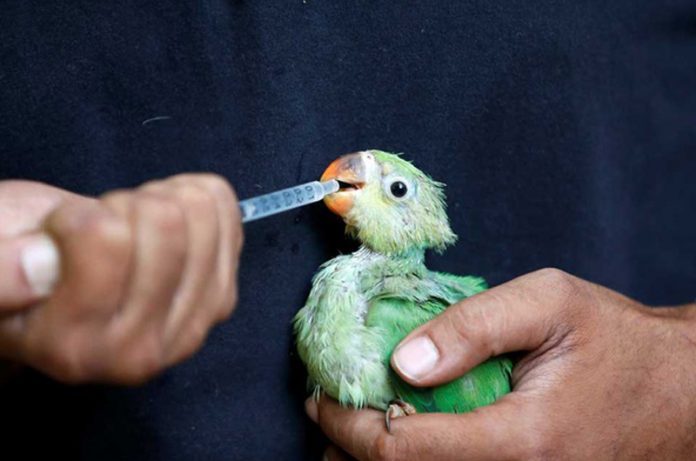 News Desk: The western states of India are burning with intense heat, and even the livestock cannot escape its effects.

Recently, rescue workers in the state of Gujarat rescued a number of birds lying on the ground that had become dehydrated and paralyzed.

Veterinarians and animal rescue workers in Ahmedabad, the state’s largest city, said they were rescuing thirsty and weak birds on a daily basis due to the intense heat. Birds are losing their ability to fly due to excessive heat and dehydration.

A report by the Reuters news agency on Thursday said temperatures had been at an all-time high for several years before the onset of summer, leading to droughts across large parts of South Asia; At that time, the Prime Minister of India Narendra Modi has warned the people about the high risk of fire.

Doctors at the veterinary hospital run by the non-profit Ahmedabad-based Jeevadaya Charitable Trust said they had treated thousands of birds in the past few weeks. Rescue workers are bringing in dozens of birds daily, including many high-flying birds, such as pigeons and kites.

Manoj Vavsar, an animal rescue worker who has been involved in bird rescue for over a decade and has been working closely with the trust, said, “This year has been one of the worst in recent years. When we go to rescue the birds, we see that more than 10 percent of the birds have to be rescued this time. ”

Doctors at the hospital on Wednesday spotted the birds taking multi-vitamin tablets and water.

Health officials in Gujarat have advised hospitals to set up special wards for the treatment of heat stroke and other inflammatory diseases due to rising temperatures.