Headlines
Redwan Rahman graduates from FilmdomThe local government minister has instructed to cut the road if necessary to remove the waterRequest to withdraw closure shop at night till EIDThe days of the Western monolithic world are over: PutinLeaders of Germany, France, and Italy in Kyiv to express solidarity‘Presidents of two countries call and pressurized Mbappé’Two U.S. citizens are thought to be missing or taken prisoner in UkraineCOVID: The technical committee suggested lifting some restrictionsPetrol prices hit record highs in the USCanada wants a stern warning against cigarettesThe task force to protect the mountains, demanded the formation of a speedy trial tribunalDepot fire: CID tries to find the cause on CCTVRussian passports are being issued in occupied UkraineFire on Parabat Express: Railroad to Sylhet is normal after 4 hoursAnother 24 children died in Mariupol, Ukraine said
Home International Indo-German distance on climate cooperation, Ukraine
Facebook
Twitter
WhatsApp
Print 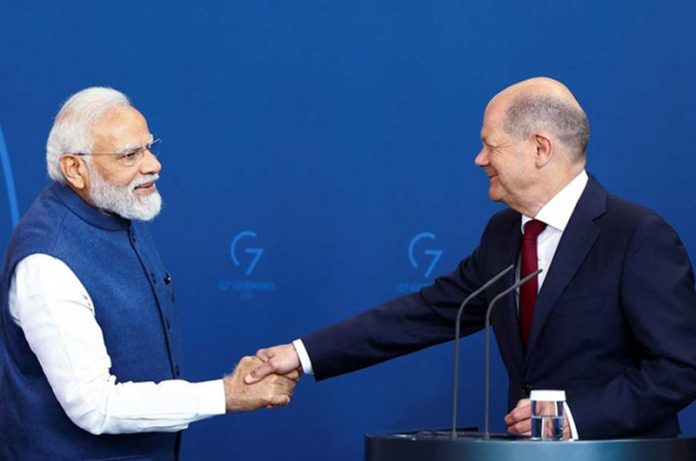 In a statement issued after a meeting between the two leaders in Berlin on Monday, Schultz outlined the two countries’ common goals, such as fighting climate change and cooperating in democracies, but they were far apart in the Ukraine war, Reuters reported.

Modi’s remarks contradicted Schultz’s remarks on Russia’s invasion of Ukraine. Although Modi called for a ceasefire, he ignored calls from the West to condemn the Kremlin’s actions.

A week after agreeing to send heavy weapons for the first time to help Ukraine in the war, Shaltz once again called on President Vladimir Putin to withdraw Russian troops from the neighboring country.

And Modi, who buys most of his military equipment from Russia, says dialogue is the only way to solve the problem.

“We believe that no one will win this war, everyone will lose,” he said. We are for peace. “

Modi, who has not held a single press conference in his home country since becoming India’s prime minister in 2014, did not give journalists a chance to ask questions after reading a pre-prepared statement.

He is scheduled to travel from Germany to Denmark and France on a trip Europe.

Germany has recently taken steps to reduce its trade dependence on China by recognizing it as a strategic rival. In foreign policy, Berlin tends to strengthen ties with Asia’s democratic allies.

Germany’s trade with India, the world’s second-most populous country, was 10 percent lower than China’s in 2021.

The G8 summit of the world’s leading economies is scheduled to take place in Germany in June. A German government spokesman said on Monday that India had been invited to the conference as a guest country.