Headlines
Redwan Rahman graduates from FilmdomThe local government minister has instructed to cut the road if necessary to remove the waterRequest to withdraw closure shop at night till EIDThe days of the Western monolithic world are over: PutinLeaders of Germany, France, and Italy in Kyiv to express solidarity‘Presidents of two countries call and pressurized Mbappé’Two U.S. citizens are thought to be missing or taken prisoner in UkraineCOVID: The technical committee suggested lifting some restrictionsPetrol prices hit record highs in the USCanada wants a stern warning against cigarettesThe task force to protect the mountains, demanded the formation of a speedy trial tribunalDepot fire: CID tries to find the cause on CCTVRussian passports are being issued in occupied UkraineFire on Parabat Express: Railroad to Sylhet is normal after 4 hoursAnother 24 children died in Mariupol, Ukraine said
Home Economy It was wrong to believe traders: Commerce Minister
Facebook
Twitter
WhatsApp
Print 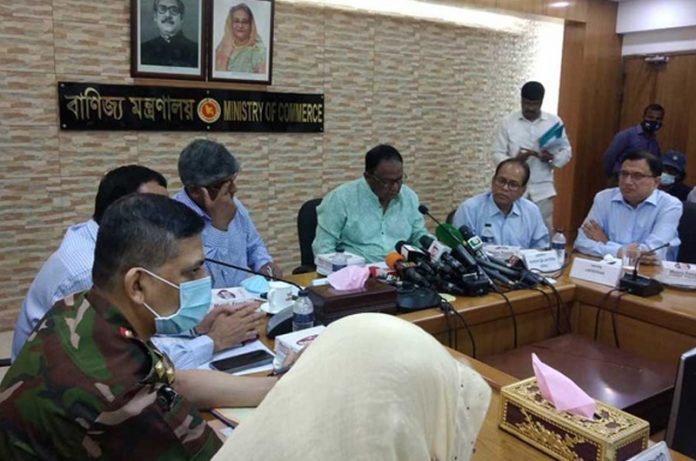 Staff Reporter: Expressing frustration over the recent turmoil in the edible oil market, Commerce Minister Tipu Munshi said retailers and wholesalers have taken the government’s “chance to trust”; Holding the product in the hope of making more profit has created a crisis in the market.

“It simply came to our notice then. It is wrong to believe. But we have learned from childhood that people have to believe. Even though the mill owners have spoken, the retailers and wholesalers have taken advantage of the situation. ”

While Tipu Munshi was speaking at a press conference in the conference room of the Commerce Ministry on Monday afternoon, the National Consumer Rights Protection Department was still conducting operations in Dhaka and Chittagong.

Among them, officials of the department found 15,000 liters of soybean oil ‘secretly stored’ in a shop at Pahartali Bazar in Chittagong. And they have fined three shops in Dhaka’s Jatrabari for selling oil at more than the stipulated price.

Soybean oil used in cooking disappeared from the retail market before EID earlier this month. After that, with the consent of the Ministry of Commerce, the price of soybean oil was increased by TK 40 per liter to around TK 200. But even that did not improve the situation.

According to the Consumer Protection Department, traders have illegally stockpiled 40,000 tonnes of soybean oil for 10 days for extra profit.

Tipu Munshi told a news conference that action has already been taken against the oil hoarders. When and where necessary, action is being taken against them and will be taken. But they are over a million in number. That’s the problem. “

Although the Commerce Minister’s confidence in the stock of traders has been shaken, he does not disagree with the decision to increase prices.

“No matter how difficult the truth is, we have to accept it,” he told a news conference. Consider the rise in oil prices in the country, considering the international market situation. The current prices of neighboring countries India, Pakistan, and Nepal should also be taken into consideration. ”

The Commerce Minister said that it was “necessary” to change the price once again in the wake of the rise in international prices following the fixing of oil prices in February.

However, he requested the mill owners to delay the price hike “somewhat” so that people do not suffer during Ramadan.

The minister said, “I still see that it was better to increase the price once inside the rosary. Although the mill owners agreed, the retailers and wholesalers did raise the price. Oil prices will rise after EID, everyone could have guessed. ”

The government will provide TCB’s family card and other products, including edible oil, at affordable prices to one crore poor families so that the poor are not pressured by the high price of oil. TCB will supply these products next June.