Headlines
Redwan Rahman graduates from FilmdomThe local government minister has instructed to cut the road if necessary to remove the waterRequest to withdraw closure shop at night till EIDThe days of the Western monolithic world are over: PutinLeaders of Germany, France, and Italy in Kyiv to express solidarity‘Presidents of two countries call and pressurized Mbappé’Two U.S. citizens are thought to be missing or taken prisoner in UkraineCOVID: The technical committee suggested lifting some restrictionsPetrol prices hit record highs in the USCanada wants a stern warning against cigarettesThe task force to protect the mountains, demanded the formation of a speedy trial tribunalDepot fire: CID tries to find the cause on CCTVRussian passports are being issued in occupied UkraineFire on Parabat Express: Railroad to Sylhet is normal after 4 hoursAnother 24 children died in Mariupol, Ukraine said
Home More Environment It will continue to rain on Thursday, then wait for the frost
Facebook
Twitter
WhatsApp
Print 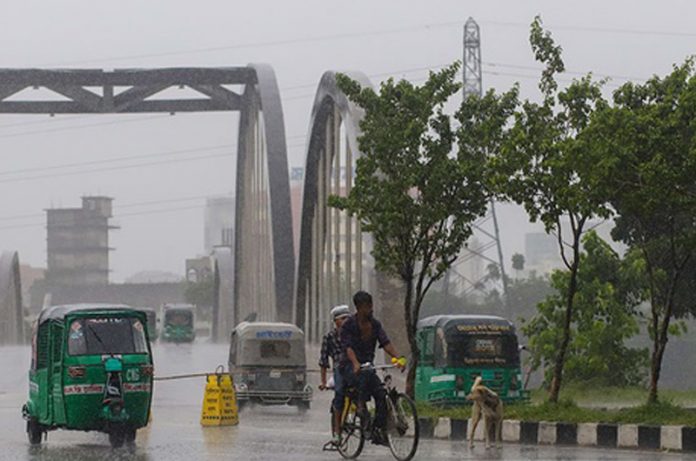 Senior Reporter: The meteorological office is predicting a few days of scattered rains from the beginning of autumn till Thursday.

Then the temperature will rise at the end of the rain. Gradually, the morning frost will increase.

According to meteorologists, the night temperature will start decreasing in November. Nature will also announce the arrival of winter. It will be completely cold in the second half of November.

Meteorologist AKM Ruhul Quddus told bdnews24.com: “It will rain in some parts of the country on Thursday as well. There is no sign of rain since Friday. ”

Noting that it has been raining for the last few days due to the combination of light pressure, Pubali, and westerly winds, he said the light pressure in Bihar and adjoining areas has become unimportant.

“It is safe to say that another light pressure in Madhya Pradesh and adjoining areas is not important at present.”

He also mentioned that the southwest monsoon winds have also left the north.

The highest rainfall of 183 mm has been recorded in Tentulia in the last 24 hours. At this time the maximum rainfall in Dhaka is 14 mm.

After three days of the heatwave in the second half of October, light to moderate rains fell almost everywhere in the country from Monday.

According to the forecast on Thursday, light to moderate rains is likely in Rangpur, Dhaka, Mymensingh, Barisal, Chittagong, and Sylhet divisions and some parts of Rajshahi and Khulna divisions. Along with that, there may be moderate to heavy rains somewhere.

Day and night temperatures can rise by 1-2 degrees Celsius.

Earlier, there was a warning number 3 at the seaport on Monday for fear of strong winds due to light pressure. A day later, the signal was lowered as it was cut off on Tuesday.