Headlines
Redwan Rahman graduates from FilmdomThe local government minister has instructed to cut the road if necessary to remove the waterRequest to withdraw closure shop at night till EIDThe days of the Western monolithic world are over: PutinLeaders of Germany, France, and Italy in Kyiv to express solidarity‘Presidents of two countries call and pressurized Mbappé’Two U.S. citizens are thought to be missing or taken prisoner in UkraineCOVID: The technical committee suggested lifting some restrictionsPetrol prices hit record highs in the USCanada wants a stern warning against cigarettesThe task force to protect the mountains, demanded the formation of a speedy trial tribunalDepot fire: CID tries to find the cause on CCTVRussian passports are being issued in occupied UkraineFire on Parabat Express: Railroad to Sylhet is normal after 4 hoursAnother 24 children died in Mariupol, Ukraine said
Home More Court JKJ’s deception: Two more testified
Facebook
Twitter
WhatsApp
Print 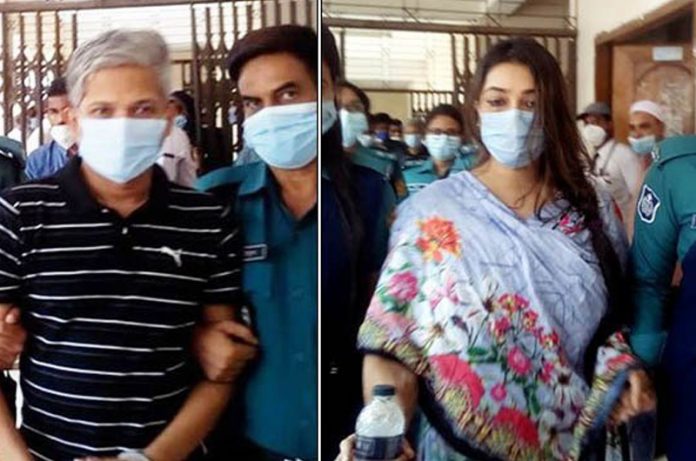 They are a couple tested for coronavirus samples. Zakaria and his wife Hasina Akter.

They testified in the court of Dhaka Metropolitan Magistrate Sadbir Yasir Ahsan Chowdhury on Monday.

Out of the 43 witnesses included in the charge sheet of the case, 20 have appeared in court and testified. The court has fixed November 10 as the date for the next witness.

Special Public Prosecutor of the concerned court Azad Rahman told bdnews24.com about this.

Special Public Prosecutor of the Dhaka Metropolitan Magistrate’s Court Azad Rahman assisted the witnesses in the court on behalf of the state.

Testimony began in court after 2.30 pm on Monday. Witness testimony was taken till 4:40 pm and cross-examination proceedings continued in the court.

Dr. Kashimpur prison on this day. Three women accused, including Sabrina were produced in court.

Besides, six accused including Ariful Haque Chowdhury were brought to the court from Keraniganj Central Jail.

Earlier on September 26, a witness testified in the same metropolitan magistrate’s court.

It is alleged in the case that after collecting samples for the detection of coronavirus in different parts of the country including Dhaka, Dr. reported to 28,000 people without testing it. Sabrina and her husband’s organization, JKG Healthcare. Most of it was later caught as fake.

The company was sealed on June 22 last year. Later a case was filed against them at Tejgaon police station. On August 5, DB police inspector Liakat Ali filed a charge sheet in the case at the Dhaka CMM court. On the basis of this, the court started the trial on August 20 by forming charges against 9 accused, including Sabrina.

The other accused in the charge sheet are- Dr. Sabrina’s husband Ariful Chowdhury, Saeed Chowdhury, Humayun Kabir, and his wife Tanzina Patwari, JKG Healthcare executive officer Shafiqul Islam, Jebunnesa Rima, proprietor of the company’s trade licenses, Biplob Das and Mamunur Rashid. They are all in jail.