Headlines
Redwan Rahman graduates from FilmdomThe local government minister has instructed to cut the road if necessary to remove the waterRequest to withdraw closure shop at night till EIDThe days of the Western monolithic world are over: PutinLeaders of Germany, France, and Italy in Kyiv to express solidarity‘Presidents of two countries call and pressurized Mbappé’Two U.S. citizens are thought to be missing or taken prisoner in UkraineCOVID: The technical committee suggested lifting some restrictionsPetrol prices hit record highs in the USCanada wants a stern warning against cigarettesThe task force to protect the mountains, demanded the formation of a speedy trial tribunalDepot fire: CID tries to find the cause on CCTVRussian passports are being issued in occupied UkraineFire on Parabat Express: Railroad to Sylhet is normal after 4 hoursAnother 24 children died in Mariupol, Ukraine said
Home International Khalilzad, the top US ambassador to Afghanistan, has resigned
Facebook
Twitter
WhatsApp
Print 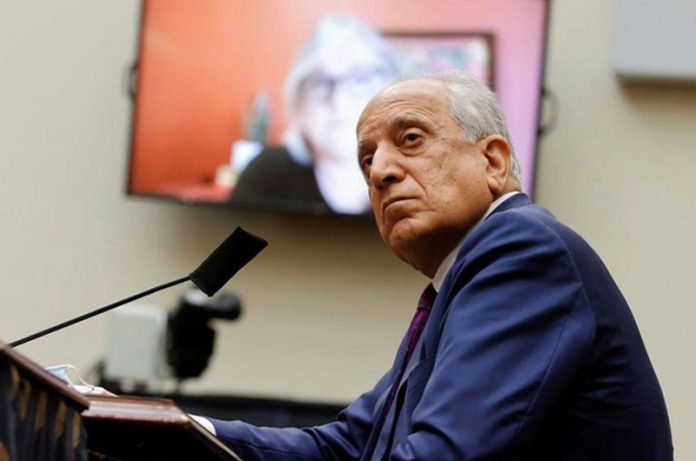 The State Department said in a statement on Monday.

Khalilzad resigned two months after the US withdrew from Afghanistan and the country fell to the Taliban. The talks, led by him in Doha, the capital of Qatar, led to an agreement between the United States and the Taliban in February 2020 to withdraw US troops from Afghanistan this year.

Khalilzad’s deputy at the US embassy in Doha, Afghanistan, Tom West, has said he will be replaced by US Secretary of State Anthony Blinken. He said Western countries would work closely with the embassy to protect US interests in Afghanistan.

A US official familiar with the matter told Reuters on condition of anonymity that Khalilzad had submitted his resignation on Friday.

The Taliban held its first talks with the Biden administration in Doha in early October after the United States withdrew from Afghanistan; Khalilzad was not in this discussion.

Khalilzad did not immediately respond to a request for comment by Reuters.

Born in Afghanistan, Khalilzad has been the US ambassador to Afghanistan since 2016.

After an agreement was reached between the Taliban and the United States to withdraw troops from Afghanistan, Khalilzad negotiated with the extremist group in Kabul’s Western-backed Ashraf Ghani government to push for a political settlement to end decades of violence.

But in mid-August, the Guinean government collapsed under pressure as the Taliban moved into Kabul after taking control of most of Afghanistan without resistance. At the time, Khalilzad sought the Taliban’s help in helping to evacuate US citizens from Afghanistan. But Afghans who worked for the US government in the long 20-year war were at risk.

Earlier, former and current US officials told Reuters that Khalilzad had been one of the biggest diplomatic failures in the United States for three years.