Headlines
The local government minister has instructed to cut the road if necessary to remove the waterRequest to withdraw closure shop at night till EIDThe days of the Western monolithic world are over: PutinLeaders of Germany, France, and Italy in Kyiv to express solidarity‘Presidents of two countries call and pressurized Mbappé’Two U.S. citizens are thought to be missing or taken prisoner in UkraineCOVID: The technical committee suggested lifting some restrictionsPetrol prices hit record highs in the USCanada wants a stern warning against cigarettesThe task force to protect the mountains, demanded the formation of a speedy trial tribunalDepot fire: CID tries to find the cause on CCTVRussian passports are being issued in occupied UkraineFire on Parabat Express: Railroad to Sylhet is normal after 4 hoursAnother 24 children died in Mariupol, Ukraine saidBelayet, who is in his fifties, has been given a good admission test against young
Home Entertainment Kissinger’s name appears on Ukraine’s ‘enemy’ list
Facebook
Twitter
WhatsApp
Print 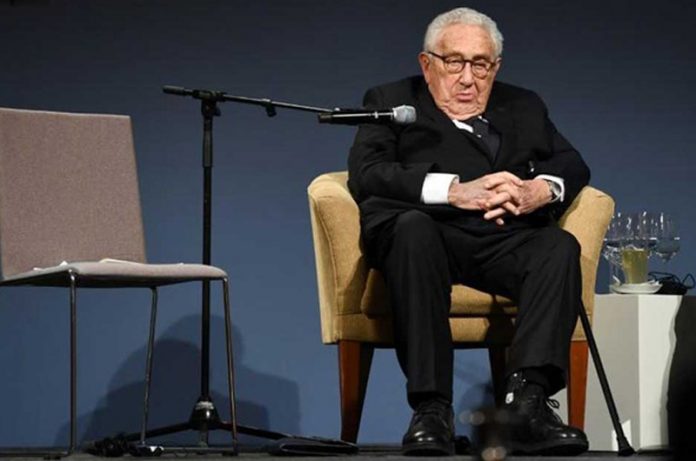 Md. Ashraful Islam: A Ukrainian website has identified US diplomat Henry Kissinger as an “enemy”.

On Friday, on his 99th birthday, the news of receiving this badge was given to Russia Today through Russian news.

According to the news media, Kissinger’s name is being added to the list by the Mirotvorots website by portraying it as biased towards Russia.

Russia claims that the website is controlled by the Ukrainian intelligence service SBU, which carries out anti-Russian propaganda.

Republican Henry Kissinger was instrumental in the formulation or practice of US foreign policy in the 1960s and 1970s. He was also controversial in various incidents, including his position for Pakistan during the liberation war of Bangladesh.

Kissinger, who served as Secretary of State from 1973 to 1977, served as the country’s national security adviser for the previous four years.

Kissinger has always been condemned by Ukraine. He has been calling for peace talks between Kyiv and Moscow. He also said that two days ago, Ukraine should give up its territory to Russia in order to end the war. Furthermore, he also called on the United States and the West not to seek an embarrassing defeat for Russia in Ukraine.

Ukrainians later blacklisted him as an “accomplice to Russian criminals.”

According to the IRT report, Kissinger was identified as a Russian propagandist and accomplice in the persecution.

Kissinger gave a set of advice on Ukraine to the countries participating in the World Economic Forum held in Davos, Switzerland last week.

He fears that if Moscow and Kyiv do not reach a peace agreement, the conflict in Ukraine could lead to a war between the US-led military alliance NATO and Russia.

To reach a Moscow-Kyiv peace deal, he advised Ukraine to return to its status quo at least before February. He also said that Ukraine would have to give up its territorial claim to Crimea in order to maintain the war situation. Kissinger also demanded that Ukraine grant Donetsk and Luhansk autonomy.

The Kyiv government has already lost control of the two regions in eastern Ukraine. On the contrary, they have been recognized by Russian President Vladimir Putin.

In a speech in Davos, Kissinger reiterated his views on the Ukraine issue eight years ago. He says it is better for Ukraine to remain a “neutral state” than to become a divisive area in Europe, which could be a bridge between Russia and Europe.

Rejecting Kissinger’s call, Ukrainian President Volodymyr Zelensky said in a Davos speech that “Ukraine will continue to fight until its territory is fully reclaimed.”

But this week, Zelensky told world leaders, “We can try, we can walk the diplomatic path unless it’s too late.”