Headlines
Redwan Rahman graduates from FilmdomThe local government minister has instructed to cut the road if necessary to remove the waterRequest to withdraw closure shop at night till EIDThe days of the Western monolithic world are over: PutinLeaders of Germany, France, and Italy in Kyiv to express solidarity‘Presidents of two countries call and pressurized Mbappé’Two U.S. citizens are thought to be missing or taken prisoner in UkraineCOVID: The technical committee suggested lifting some restrictionsPetrol prices hit record highs in the USCanada wants a stern warning against cigarettesThe task force to protect the mountains, demanded the formation of a speedy trial tribunalDepot fire: CID tries to find the cause on CCTVRussian passports are being issued in occupied UkraineFire on Parabat Express: Railroad to Sylhet is normal after 4 hoursAnother 24 children died in Mariupol, Ukraine said
Home Sports Kohli is excited to get mentor Dhoni
Facebook
Twitter
WhatsApp
Print 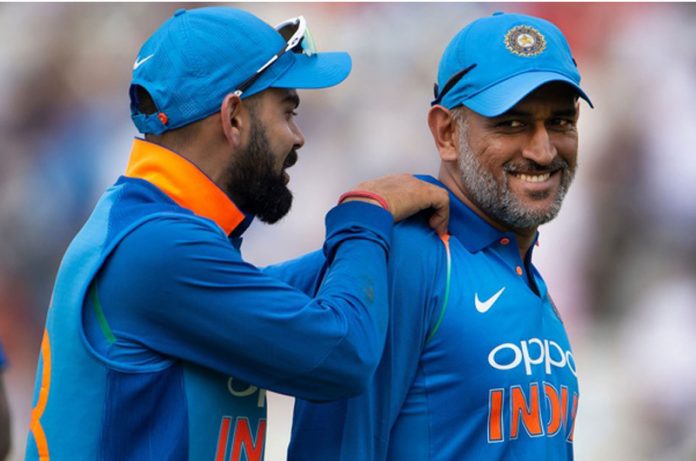 Md. Ashraful Islam: Virat Kohli started his career in international cricket under the leadership of Mahendra Singh Dhoni. The two had been teammates for a long time. The current captain is well aware of the sharpness of the cricketing brain of this successful Indian. Kohli is so excited to have his predecessor in the T20 World Cup as a mentor. He said that their confidence has increased in the presence of Dhoni.

Dhoni is the only captain to have won the ODI and T20 World Cups and the Champions Trophy. He won the title in the 2006 Twenty20 World Cup for the first time. India won the trophy at the 2011 ODI World Cup, ending a 27-year wait. The country also won the 2013 ICC Champions Trophy under his captaincy.

Under Dhoni’s leadership, India has played 200 ODIs and won 110. Both records. He is also India’s most successful captain in T20.

Dhoni has played in the previous six editions of the T20 World Cup and has led India. The former captain, who said goodbye to international cricket, will still be with the team, fulfilling important responsibilities.

Getting Dhoni as a mentor is an added motivation for everyone in the team, said India captain Kohli.

“We are really happy to have him. His presence will definitely boost the morale of the team. It will give you more confidence than you have as a team. ”

Kohli made his international debut in 2006 with an ODI tour of Sri Lanka. Where Dhoni was his captain. After proving himself, Kohli became one of the important members of Dhoni’s team.

Looking closely, Kohli understands how much impact Dhoni’s presence with the team will have. He wants to use the experience of the former captain Taitumbu.

“We want to use the experience he has been gaining over the years and discuss the match with him. Where the match is going and how we can improve in a small step, are strategic and complex issues. ”

“MS (Dhoni) is thrilled to be back, although he has always been our mentor. Once again, he has the opportunity to work with young people who are playing in a big tournament early in their careers. ”

India will start their World Cup campaign on October 24 with a match against arch-rivals Pakistan.