Headlines
Redwan Rahman graduates from FilmdomThe local government minister has instructed to cut the road if necessary to remove the waterRequest to withdraw closure shop at night till EIDThe days of the Western monolithic world are over: PutinLeaders of Germany, France, and Italy in Kyiv to express solidarity‘Presidents of two countries call and pressurized Mbappé’Two U.S. citizens are thought to be missing or taken prisoner in UkraineCOVID: The technical committee suggested lifting some restrictionsPetrol prices hit record highs in the USCanada wants a stern warning against cigarettesThe task force to protect the mountains, demanded the formation of a speedy trial tribunalDepot fire: CID tries to find the cause on CCTVRussian passports are being issued in occupied UkraineFire on Parabat Express: Railroad to Sylhet is normal after 4 hoursAnother 24 children died in Mariupol, Ukraine said
Home Country Last homage to Muhith in his birth land
Facebook
Twitter
WhatsApp
Print 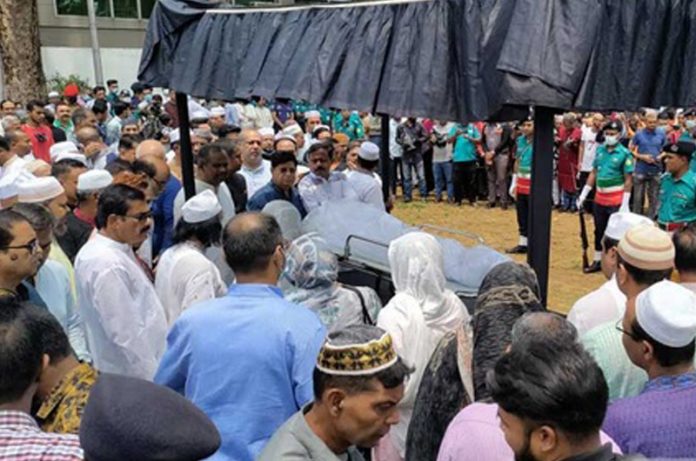 Sylhet Representative: In the words of Abul Maal Abdul Muhith, he was ‘exclusively a man of Sylhet’. The former finance minister was bid farewell by the people of his birth land.

Muhith’s coffin was laid to rest at the Shaheed Minar premises in the city’s Chauhatta area from 12 noon to 1 pm on Sunday. At this time, a mournful atmosphere was created there.

Muhith, a language activist, left the party during his diplomatic mission at the Pakistan Embassy in Washington in 1971 and showed allegiance to Bangladesh. He played a role in creating public opinion in favor of Bangladesh in the sociopolitical arena of the United States.

At the time of his departure, his national flag was wrapped in a coffin by the district administration. People of different classes and professions, regardless of party affiliation, laid wreaths at Muhith’s coffin, stood silently, and paid their respects to him.

Muhith, 88, died at United Hospital in Dhaka on Friday night. He has been suffering from a variety of physical complications since being infected with the coronavirus last year.

Muhith’s body was taken to Sylhet on Saturday, after a one-time janaza in Dhaka and paying homage at the central Shaheed Minar. A freezing van with his coffin reached his house at Hafiz Complex on the banks of Dhopadighi around 10 pm.

Sylhet District Awami League and Metropolitan Awami League have declared two days of mourning for Muhith’s death. Leaders and activists are wearing black badges, Milad and Doa mahfil will be held on the day after EID.

The body of the former finance minister was taken to Shaheed Minar from Hafiz Complex at 12 noon on Sunday. Foreign Minister AK Abdul Momen, Muhith’s younger brother, and family members including his son Shahed Muhith were also present.

In the beginning, the Divisional Commissioner of Sylhet paid homage to the former minister with flowers. After that Sylhet District Administration, Sylhet Metropolitan Police, and District Police, Sylhet City Corporation paid their respects one by one.

After paying their respects, the former finance minister was taken to the Sylhet Government Alia Madrasa ground. He was buried at the family graveyard in Rayanagar area of ​​the city after Janaza at 2 pm.