Headlines
Redwan Rahman graduates from FilmdomThe local government minister has instructed to cut the road if necessary to remove the waterRequest to withdraw closure shop at night till EIDThe days of the Western monolithic world are over: PutinLeaders of Germany, France, and Italy in Kyiv to express solidarity‘Presidents of two countries call and pressurized Mbappé’Two U.S. citizens are thought to be missing or taken prisoner in UkraineCOVID: The technical committee suggested lifting some restrictionsPetrol prices hit record highs in the USCanada wants a stern warning against cigarettesThe task force to protect the mountains, demanded the formation of a speedy trial tribunalDepot fire: CID tries to find the cause on CCTVRussian passports are being issued in occupied UkraineFire on Parabat Express: Railroad to Sylhet is normal after 4 hoursAnother 24 children died in Mariupol, Ukraine said
Home Entertainment Lata Didi leaves emptiness: Modi
Facebook
Twitter
WhatsApp
Print 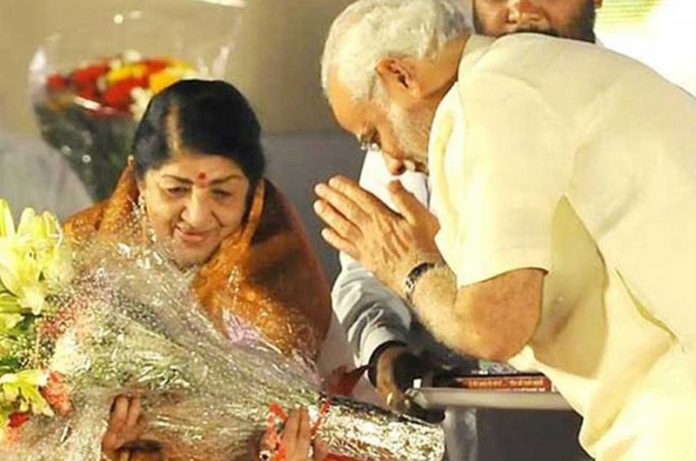 News Desk: Lata Mangeshkar, a legendary musician from the Indian subcontinent, has died after being hospitalized for nearly four weeks after contracting Covid.

President of India Ramnath Kobind and Prime Minister Narendra Modi have expressed their condolences over the death of Bharat Ratna Lata Mangeshkar.

In his condolence message, Modi said that the grief over the death of this musician could not be expressed in words.

“Lata Didi was kind and caring. He left us. The void he left behind is not to be filled.

“Future generations will remember him as a symbol of Indian culture. His melodious voice had an unparalleled ability to enchant people. “

Kokilkanthi was undergoing treatment at the Breach Candy Hospital in Mumbai. He died there on Sunday morning, PTI reported.

Prime Minister Modi has spoken to Lata Mangeshkar’s family. He expressed his condolences to the bereaved family.

Modi said, “I have always received immense affection from Lata Didi. I consider it my honor. My conversation with him will be unforgettable. I am deeply saddened by his passing. Om Shanti. ”

On the death of the legendary artist, President Ramnath Kobind said, “Lataji’s death is as heartbreaking for me as it is for millions of people around the world.” The beauty of India is revealed in a wide range of his songs.

“Her golden voice is immortal, which will continue to resonate in the hearts of her fans. My condolences to his family, friends, and fans. “

He wrote, “The death of Kokila Bharat Ratna Lata Mangeshkarji, the pride of the country and the voice of the music world, is very sad. My sincere tribute to the Holy Spirit. His death is an irreparable loss for the country. He has always been an inspiration to all music fans. “

Parliamentary Affairs Minister Prahlad Joshi tweeted: He has enriched our lives for decades with his lively voice.

“India’s Nightingale is gone but he will live in our hearts forever. Om Shanti. ”

Lata, who started playing in Indian films in the mid-forties of the last century, soon became an essential name.

Lata has sung in more than a thousand movies in her long career. He has sung in 37 regional languages ​​of India as well as in foreign languages. He is considered by many to be one of the best music artists of all time in India.