Headlines
The local government minister has instructed to cut the road if necessary to remove the waterRequest to withdraw closure shop at night till EIDThe days of the Western monolithic world are over: PutinLeaders of Germany, France, and Italy in Kyiv to express solidarity‘Presidents of two countries call and pressurized Mbappé’Two U.S. citizens are thought to be missing or taken prisoner in UkraineCOVID: The technical committee suggested lifting some restrictionsPetrol prices hit record highs in the USCanada wants a stern warning against cigarettesThe task force to protect the mountains, demanded the formation of a speedy trial tribunalDepot fire: CID tries to find the cause on CCTVRussian passports are being issued in occupied UkraineFire on Parabat Express: Railroad to Sylhet is normal after 4 hoursAnother 24 children died in Mariupol, Ukraine saidBelayet, who is in his fifties, has been given a good admission test against young
Home More Court Lawmaker Haji Selim is in jail with the sentence
Facebook
Twitter
WhatsApp
Print 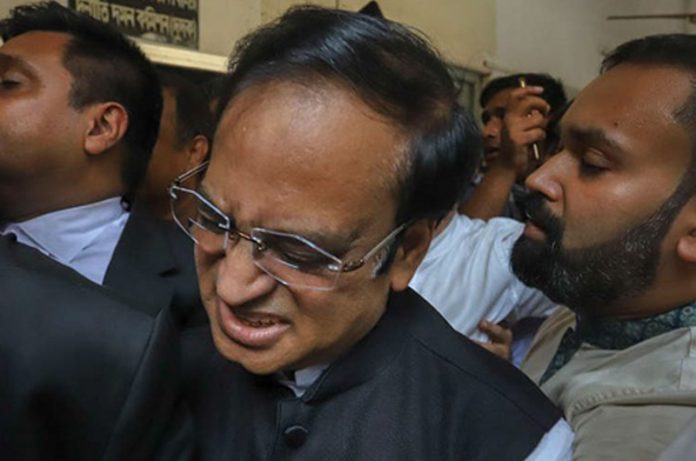 Court Reporter: Old Dhaka MP Haji Selim, who was sentenced to 10 years in prison in a corruption case, has been sent to jail after his bail application was rejected.

As a Member of Parliament, Haji Selim was asked by his lawyers to give a division in the jail. The judge has ordered to take action in this regard as per the jail rules.

His lawyers Shri Prannath and Syed Ahmed Raja appeared for Haji Selim on bail on the condition of appeal or any other condition. On behalf of the ACC, Mosharraf Hossain Kajal opposed bail.

Defendant’s lawyers demanded division and proper treatment for him in jail, saying Haji Selim had lost his speech due to bleeding in the brain.

Following the hearing, the judge directed the jail authorities to take action as per the jail rules by sending him to jail.

Haji Selim entered the court premises in a car after 3 pm on Sunday. Many of his supporters were already there a few hours ago. Police security has been beefed up at the entrance and outside the court since the morning.

Haji Selim was convicted in a case of illegal acquisition of assets by the ACC, which was filed on October 24, 2007, during a state of emergency under the caretaker government.

On April 27 of the following year, the special court sentenced him to a total of 13 years in prison under two sections. Besides, Haji Selim’s wife Gulshan Ara Begum was sentenced to three years imprisonment under Section 109 of the Penal Code for aiding and abetting the acquisition of non-known assets.

Following the hearing of the appeal, the judgment of the High Court was quashed on 12 January 2015. Haji Selim’s appeal was again heard in the High Court by the Appellate Division.

Following that hearing, on March 9 last year, the High Court bench upheld Haji Selim’s sentence of 10 years in one section and acquitted him in another section of 3 years.

Appeal of Gulshan Ara Begum, wife of Haji Selim, who was sentenced to death by a court of law, died while the appeal was pending.

The two judges of the bench. After the signatures of Moinul Islam Chowdhury and AKM Zahirul Haque, Haji Selim was asked to surrender to the court within 30 days of receiving the copy of the 68-page verdict.

Meanwhile, Haji Selim left for Bangkok on the eve of Eid-ul-Fitr on May 2 with medical treatment.

At the time, Khurshid Alam Khan, a lawyer for the Anti-Corruption Commission, said there was “no legal change” for convicted Haji Selim to go abroad.

On the other hand, the BNP leaders raised questions about not getting permission to go abroad for the treatment of convicted BNP chairperson Khaleda Zia and the departure of convicted Haji Selim.

Home Minister Asaduzzaman Khan Kamal told reporters that there was no violation of law as Haji Selim went abroad and returned.

Haji Selim returned to the country on a Thai Airways flight on May 5 after EID.