Headlines
The local government minister has instructed to cut the road if necessary to remove the waterRequest to withdraw closure shop at night till EIDThe days of the Western monolithic world are over: PutinLeaders of Germany, France, and Italy in Kyiv to express solidarity‘Presidents of two countries call and pressurized Mbappé’Two U.S. citizens are thought to be missing or taken prisoner in UkraineCOVID: The technical committee suggested lifting some restrictionsPetrol prices hit record highs in the USCanada wants a stern warning against cigarettesThe task force to protect the mountains, demanded the formation of a speedy trial tribunalDepot fire: CID tries to find the cause on CCTVRussian passports are being issued in occupied UkraineFire on Parabat Express: Railroad to Sylhet is normal after 4 hoursAnother 24 children died in Mariupol, Ukraine saidBelayet, who is in his fifties, has been given a good admission test against young
Home Headlines Leaders of Germany, France, and Italy in Kyiv to express solidarity
Facebook
Twitter
WhatsApp
Print 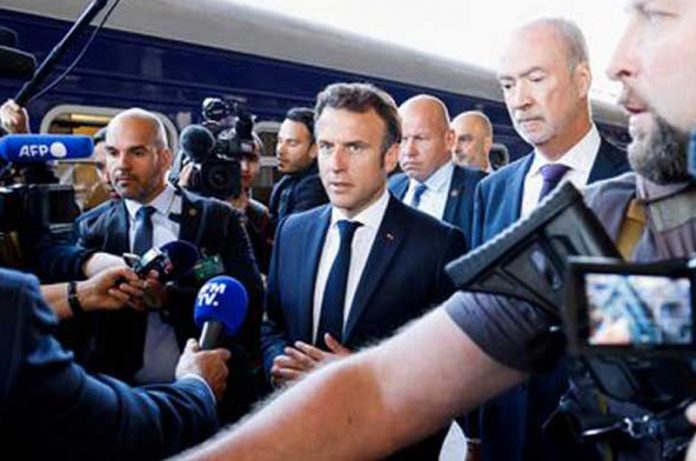 The top European leaders arrived in the war-torn continent on a joint visit on Thursday. A train carrying them to Ukraine took the three leaders together overnight, Reuters reported.

Appearing in Kyiv, Macron said: “This is an important moment. We are sending a message of unity, support, present and future of the Ukrainians, as the coming weeks may be very difficult. “

They will be joined by Romanian President Klaus Johannes during a meeting with Ukrainian President Volodymyr Zelensky. The meeting is expected to focus on Kyiv’s accession to the European Union and the war.

They are not responding enough to the war, and the three leaders are thought to have fled to Kyiv to escape criticism from Ukraine. It took them a few weeks to organize the tour.

“We are here, we are focused, we will go with President Zelensky on a battlefield where genocide has taken place,” Macron said.

Asked why he was on the trip now, an official at the Elijah Palace said they considered it the best time to visit ahead of next week’s EU summit. The 28-member bloc is expected to discuss Kyiv’s request to join the conference.

Zelensky is also expected to pressure visiting leaders to send more weapons to his army, which is under pressure from Russia’s onslaught.

Ukraine accuses France, Germany, and Italy of wasting time helping Ukraine. These countries are putting their own prosperity ahead of Ukraine’s independence and security and are delaying arms supplies, Kyiv said.

“Zelensky is in a very difficult situation,” said a senior European Union official. The Ukrainian army needs weapons, and its numbers are dwindling. “