Headlines
Redwan Rahman graduates from FilmdomThe local government minister has instructed to cut the road if necessary to remove the waterRequest to withdraw closure shop at night till EIDThe days of the Western monolithic world are over: PutinLeaders of Germany, France, and Italy in Kyiv to express solidarity‘Presidents of two countries call and pressurized Mbappé’Two U.S. citizens are thought to be missing or taken prisoner in UkraineCOVID: The technical committee suggested lifting some restrictionsPetrol prices hit record highs in the USCanada wants a stern warning against cigarettesThe task force to protect the mountains, demanded the formation of a speedy trial tribunalDepot fire: CID tries to find the cause on CCTVRussian passports are being issued in occupied UkraineFire on Parabat Express: Railroad to Sylhet is normal after 4 hoursAnother 24 children died in Mariupol, Ukraine said
Home Headlines Let the covid vaccine be universal: Sheikh Hasina
Facebook
Twitter
WhatsApp
Print 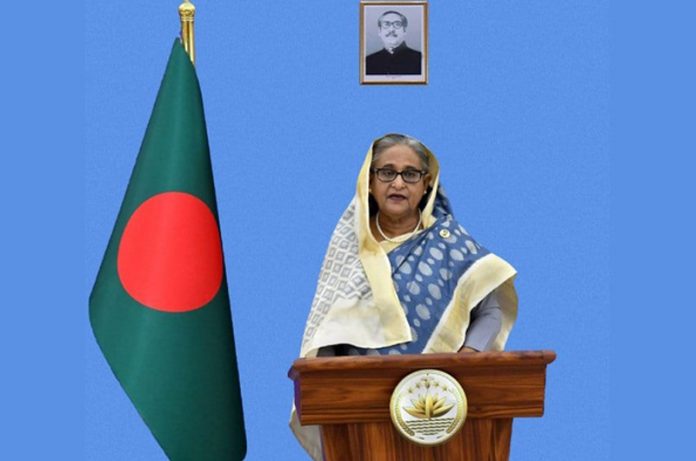 News Desk: In order to speed up the fight against the epidemic, Prime Minister Sheikh Hasina demanded that the COVID vaccine should be made available to the world without leaving it in the hands of any country or company.

The prime minister, who is visiting New York to attend the UN General Assembly, made the demand at a conference hosted by US President Joe Bain on Wednesday.

Sheikh Hasina’s video message was broadcast at the conference organized by the White House to end the epidemic and ensure greater health security.

Although the coronavirus vaccine has become the main weapon in the fight against the epidemic, its intellectual property has become an obstacle to dealing with the situation in poor and developing countries. Vaccines are also showing inequality between rich and poor.

“To ensure universal access, developing and local LDCs must be allowed to produce vaccines locally.”

At the beginning of his speech, the Prime Minister of Bangladesh thanked US President Biden for organizing the conference.

The United States has backed a proposal to waive the intellectual property rights of the Covid-19 Ticker at the World Trade Organization (WTO) but has not agreed.

The Prime Minister said that the government has taken three steps to control the epidemic and stressed taking three more steps to ensure a secure future in the future.

The government has so far allocated an incentive package of দশ 15.4 billion, disbursed ৬ 176 million to 44 lakh beneficiaries, including the poor, the elderly, widows, and the disabled, as well as the informal sector workers, he said.

Sheikh Hasina said the government is giving priority to three issues to secure the future during this epidemic.

These measures include, first, the formulation of inclusive growth policies with an emphasis on improved health care systems and social security programs; Second, the emphasis on innovation, employment, and investment in sustainable economic recovery; Third, mitigate the damage caused by climate change and reduce carbon emissions.