Headlines
The local government minister has instructed to cut the road if necessary to remove the waterRequest to withdraw closure shop at night till EIDThe days of the Western monolithic world are over: PutinLeaders of Germany, France, and Italy in Kyiv to express solidarity‘Presidents of two countries call and pressurized Mbappé’Two U.S. citizens are thought to be missing or taken prisoner in UkraineCOVID: The technical committee suggested lifting some restrictionsPetrol prices hit record highs in the USCanada wants a stern warning against cigarettesThe task force to protect the mountains, demanded the formation of a speedy trial tribunalDepot fire: CID tries to find the cause on CCTVRussian passports are being issued in occupied UkraineFire on Parabat Express: Railroad to Sylhet is normal after 4 hoursAnother 24 children died in Mariupol, Ukraine saidBelayet, who is in his fifties, has been given a good admission test against young
Home Sports Liverpool is under pressure to win the ‘treble’ in front of Real
Facebook
Twitter
WhatsApp
Print 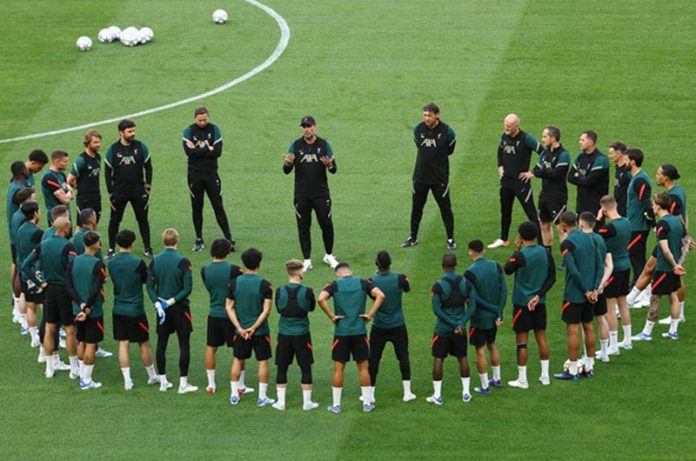 Sports Desk: Quadruple! Even a few days ago, the word came up again and again in every press conference of Liverpool coaches or players. But their chances of winning four titles this season have been dashed on the last day of the Premier League. However, the hopes of winning the treble of the two domestic trophy-winning teams are still alive. But when the mercury of expectation is at the top, the pressure naturally goes away. This is what happened to Liverpool before they faced Real Madrid in the Champions League final.

The two giants from Spain and England will take on Europe on Saturday at the National Stadium in Paris. The match will start at 1 pm Bangladesh time.

Liverpool has not lost a match since last March. Jürgen Klopp’s side has lost just three matches this season. Bring home the League Cup and the FA Cup.

In the last round of the Premier League, their title dream was shattered by 1 point behind Manchester City. If they lose against Real this time, their frustration will be doubled.

The situation could not be different for Real. The expectation surrounding them at the start of the season was not too high. But Carlo Ancelotti’s side has won the La Liga title with great success, leaving everyone far behind. The Champions League final is not a new stage for them. However, this time Madrid’s team has become the ‘king of return’ by writing all the incredible stories of turning around on the way to the final.

Liverpool has lost fewer matches than Real in the Champions League this season. So in the final, the English team is the favorite as the gamblers. However, the team known as ‘All Red’ is expected to be under more pressure in the final in Paris.

The season is passing like a dream for Real. But at the beginning of the season, there was curiosity around them. In front of that, the team is now on the verge of a ‘double’ victory, with the Champions League trophy at arm’s length after taking home the La Liga title. All of this is possible thanks to the work of Karim Benzema, the incredible form of the French star.

Benzema is at the top of the list of top scorers in the Champions League with 15 goals in 11 matches. 10 of these 15 goals are in the knockout stage again. It was his performance that brought Real to the brink of winning the European Trophy for the fifth time in nine years.

He is also the top scorer in La Liga this year. He scored 28 goals in 32 matches, nine more than the second-ranked player on the list. In the 2021-22 season, he has scored 44 goals and 15 assists in 45 matches in all competitions. He is a big contender to win the Ballon d’Or this year.

It has taken a long time for the 34-year-old footballer to come to light in this way. Ever since he joined Real Madrid in 2009, he has been quietly doing his job. Most of the time he was in the shadow of Cristiano Ronaldo. After the departure of the Portuguese superstar in 2018, Benzema established himself as the undisputed leader of the party. As the most influential player, he created a special place in the team.

Benzema has scored just one goal in four Champions League finals. That goal was against Liverpool in 2018. Real went ahead with his goal that day. Real won the match 3-1 with two fatal errors by Liverpool goalkeeper Loris Carius and a superb overhead kick by Gareth Bale. Won the third consecutive title and the record 13th title at home.

The memory of that final four years ago will surely serve as an additional inspiration for Benzema and her teammates. At the same time, the story of Real’s remarkable return to the competition this season has given them the confidence that they can’t lose. Can win in any situation.

This time in the knockout stage, PSG, Chelsea, and Manchester City – Real took the place in the next step by turning from the edge of the ditch against the three teams.

Real were trailing 2-0 with two legs at one stage against PSG in the last 16. Then that magical chapter of the last 30 minutes; They beat Benzema’s 16-minute hat-trick.

After a 3-1 win over Benzema’s hat-trick in the first leg against Chelsea, Real lost 4-3 at home and fell behind. From there, Rodrigo and Benzema scored two goals each to take a 5-4 lead to advance to the semi-finals.

The most exciting was the incredible win against Manchester City. In the last four two-legged fights, City was leading 5-3 with 179 minutes to spare in the final. But the reality is not to end before the end! They prove it once again.

Rodrigo equalized with two goals in the final two minutes before Real reached the final with a 6-5 lead. Benzema, the team’s brightest name throughout the season, scored the goal.

They wrote all the stories of the turning point in the familiar courtyard, the Santiago Bernabéu. The field became such a place, from the fans to the players began to believe, that miracles are possible there.

Real have set their own record by winning their 35th La Liga title with almost a month to go before the end of the season. In the competition for the best in Europe, they are now on the verge of playing in their 16th final. Coach Ancelotti used the opportunity to give the players some rest after winning the league earlier so that they could reach the final without the risk of injury.

Liverpool star forwards Mohamed Salah, Virgil van Dyke, Fabinio and Thiago have been battling injuries for the past few weeks. The question is how to fit they are for the final.

Salah, however, has repeatedly said that he will avenge the “worst” moment of his career. Liverpool reached the final of the Champions League in 2018 with his extraordinary performance. But in the final, he got a shoulder injury in the 30th minute of Sergio Ramos’ challenge. Continue playing for a while with the injury. But after a while, he got up from the field with teary eyes. Liverpool lost 3-1. This time he wants to take revenge by losing to Real.

But will Liverpool be able to win the trophy despite the pressure of expectations? The answer will come in a few hours.