Headlines
Redwan Rahman graduates from FilmdomThe local government minister has instructed to cut the road if necessary to remove the waterRequest to withdraw closure shop at night till EIDThe days of the Western monolithic world are over: PutinLeaders of Germany, France, and Italy in Kyiv to express solidarity‘Presidents of two countries call and pressurized Mbappé’Two U.S. citizens are thought to be missing or taken prisoner in UkraineCOVID: The technical committee suggested lifting some restrictionsPetrol prices hit record highs in the USCanada wants a stern warning against cigarettesThe task force to protect the mountains, demanded the formation of a speedy trial tribunalDepot fire: CID tries to find the cause on CCTVRussian passports are being issued in occupied UkraineFire on Parabat Express: Railroad to Sylhet is normal after 4 hoursAnother 24 children died in Mariupol, Ukraine said
Home Country Looking for a place to build a second nuclear power plant: PM
Facebook
Twitter
WhatsApp
Print 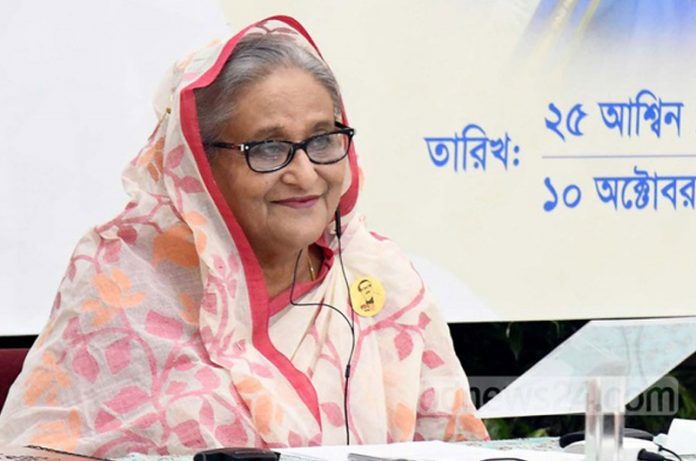 Staff Reporter: Prime Minister Sheikh Hasina has said she plans to build another nuclear power plant after Rooppur to meet the long-term demand for electricity.

He said that the government is working to build Bangladesh as a ‘developed, prosperous country’ so that Bangladesh never has to fall behind and no vulture’s hand falls on this country again.

The Prime Minister said this while inaugurating the installation of the reactor pressure vessel or nuclear reactor at the first unit of Rooppur Nuclear Power Plant in Pabna through a video conference from Ganobhaban on Sunday.

Project officials say it will not take long for the project to be completed once the reactor is installed. 50 percent of the work of the first unit will be completed this year.

The government hopes to start an experimental power supply to the national grid from the first 1,200-megawatt unit in Rooppur in April 2023. If all goes well, the commercial power supply can be started in February 2024.

This time, Bangladesh went one step further on the path of fulfilling its dream by installing a reactor pressure vessel there.

The Prime Minister said, “Our goal is to take Bangladesh forward. In other words, we are now a part of nuclear power in Bangladesh today… I would say we have been able to take a place there, and that is for peace. This is very important. We are using nuclear energy for peace. ”

He said the government is celebrating the birth centenary of Father of the Nation Bangabandhu Sheikh Mujibur Rahman, as well as the golden jubilee of independence this year. At the same time, it is a matter of great pride for Bangladesh to be able to take forward the work of nuclear power plants.

The Prime Minister said that several levels of security measures have been taken for the Rooppur nuclear power plant.

“I had some questions there, after we did it, its safety and waste management. Because Bangladesh is densely populated, it is not possible to manage waste here. The agreement that we have also ensured that Russia will always manage its waste. We make sure of that. ”

The Prime Minister said Bangladesh is also building its own skilled manpower as a result of setting up nuclear power plants. They have to be trained. I am training them in Russia and India. ”

Highlighting the 100-year Delta Plan to take the country forward, he said, “This country should never be left behind. And so that no vulture’s hand falls on Bangladesh. We want the progress and development of Bangladesh to move forward at an irresistible pace. ”