Headlines
Redwan Rahman graduates from FilmdomThe local government minister has instructed to cut the road if necessary to remove the waterRequest to withdraw closure shop at night till EIDThe days of the Western monolithic world are over: PutinLeaders of Germany, France, and Italy in Kyiv to express solidarity‘Presidents of two countries call and pressurized Mbappé’Two U.S. citizens are thought to be missing or taken prisoner in UkraineCOVID: The technical committee suggested lifting some restrictionsPetrol prices hit record highs in the USCanada wants a stern warning against cigarettesThe task force to protect the mountains, demanded the formation of a speedy trial tribunalDepot fire: CID tries to find the cause on CCTVRussian passports are being issued in occupied UkraineFire on Parabat Express: Railroad to Sylhet is normal after 4 hoursAnother 24 children died in Mariupol, Ukraine said
Home Headlines Macron is on his way to becoming the President of France again
Facebook
Twitter
WhatsApp
Print 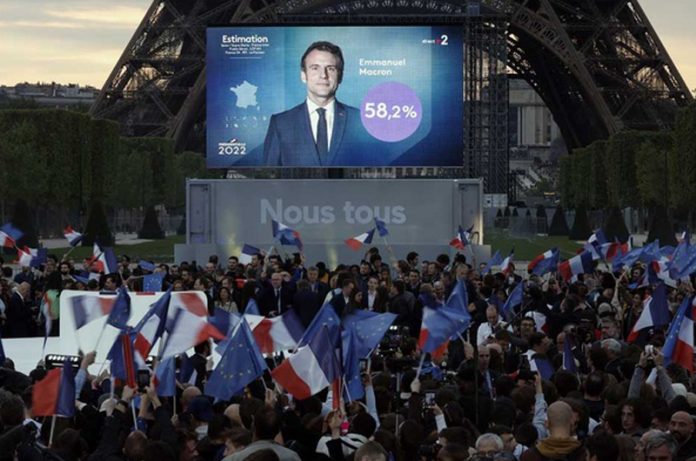 Md. Ashraful Islam: Emmanuel Macron is on his way back to the presidency with a clear victory over the far-right candidate Marin Le Pen in the second round of presidential elections in France.

According to French media reports, Macron received 56 percent of the vote, while his opponent Marin Le Pen received 42 percent.

The French media predicted the victory of Macron, a combination of the actual results of the vote and the booth return poll; Which is somehow certain.

According to the BBC, Macron’s victory in the election will make him the first French president to be re-elected in 20 years.

European Council President Charles Michael welcomed Macron as soon as he was predicted to win the election.

Macron’s supporters erupted in jubilation as the results of the vote floated on a large screen in a park at the foot of the Eiffel Tower in France.

They flew the French and EU flags and hugged each other, rejoicing in macro, macro sounds. Meanwhile, the opposite picture has been seen in Le Pen’s camp.

Le Pen thanked the people for voting for him. He also addressed supporters chanting slogans in his name.

Le Pen said the number of votes cast in the election was still a victory for his party. He also said that he respects the verdict that came in the ballot box.

The first round of voting in the French presidential election took place on April 10. Macron was ahead in that vote, Marin Le Pen was next in line. However, there was uncertainty as the gap was short.

The two candidates faced off in the second round of voting on April 24. Macron’s main rival, Le Pen, is running for president for the third time. He lost the 2016 election to Macron.