Headlines
Redwan Rahman graduates from FilmdomThe local government minister has instructed to cut the road if necessary to remove the waterRequest to withdraw closure shop at night till EIDThe days of the Western monolithic world are over: PutinLeaders of Germany, France, and Italy in Kyiv to express solidarity‘Presidents of two countries call and pressurized Mbappé’Two U.S. citizens are thought to be missing or taken prisoner in UkraineCOVID: The technical committee suggested lifting some restrictionsPetrol prices hit record highs in the USCanada wants a stern warning against cigarettesThe task force to protect the mountains, demanded the formation of a speedy trial tribunalDepot fire: CID tries to find the cause on CCTVRussian passports are being issued in occupied UkraineFire on Parabat Express: Railroad to Sylhet is normal after 4 hoursAnother 24 children died in Mariupol, Ukraine said
Home Headlines Mariupol’s resistance fighters are like in a steel factory
Facebook
Twitter
WhatsApp
Print 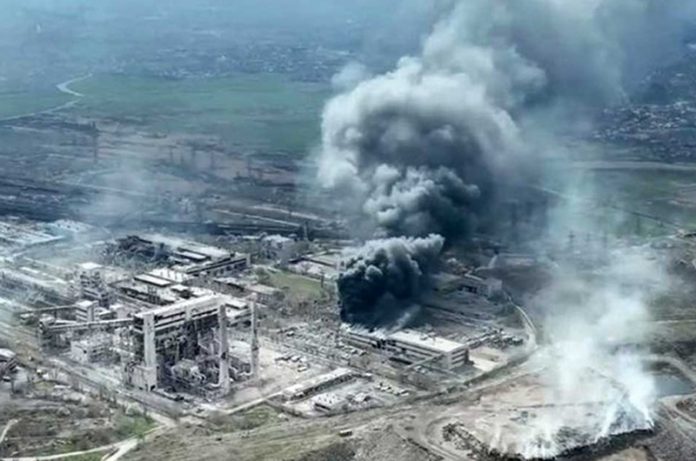 News Desk: The last of the Ukrainian resistance fighters in Mariupol is said to be trapped under the collapsed buildings of the Azovstail steel plant, with civilians reportedly stationed in bunkers.

Capt. Sevietoslav Palamar, deputy commander of Ukraine’s far-right Azov Battalion, one of the last resistance fighters, told the BBC from the besieged factory.

This neo-Nazi Azov Battalion was later incorporated into the Ukrainian National Guard. In addition to their fighters, the Ukrainian Marine Brigade, Border Guards, and police officers are taking part in the resistance war at the steel plant.

Captain Palamar claims that they all resisted the onslaught of Russian attacks one after another.

“I have always said that as long as we are here, Mariupol will be under the control of Ukraine,” he said.

The Azvastail Iron and Steel Factory covers an area of ​​11 sq km. There are many big buildings, underground bunkers and tunnels. Conducting ground operations in this maze of tunnels and workshops is risky for any force in the world.

Russia’s President Vladimir Putin has ordered his troops to blockade the factory so that “not a single fly can fly out”.

Over the past few weeks, much of Russia’s Mariupol area has been reduced to rubble by a series of bombings and street fighting. Russia’s main goal is to take control of the port city on the shores of the Azov Sea. If this Ukrainian trading center falls into the hands of Russia, its strategic position in the Donbas region will become much stronger.

The Russians fired shells from a warship at the steel plant and dropped “bunker destroyers” bombs, Palamar said.

However, the BBC could not verify any of his statements. Earlier, a Ukrainian Marine commander in the same factory had said the same thing. The commander said the Russians outnumbered them and were running out of supplies.

“Virtually all buildings and areas in Azvastail have been destroyed. They dropped heavy bombs, and bunker destroyers, which caused extensive damage. Many of us died in the bunker, many were injured. Some civilians are trapped under collapsed buildings, “said Palamar.

Asked how many Ukrainian resistance fighters are still in Mariupol, he said, “There are enough troops just to repel the attack.”

He said civilians were away from fighters in separate areas. They have sheltered 80 to 100 people in the basement of the buildings.

However, he acknowledged that their numbers were not enough to defeat Hussein’s government and that the number of civilians in the steel plant was unknown.

He said some bunker entrances were blocked with heavy concrete slabs and heavy machinery would be required to remove them.

“We have contacts with civilians in the areas where we can go. We know there are small children, even three-month-olds, “he said.

Palamar requested a safe passage to allow civilians to exit the steel plant. He also called for a third country or an international organization to be responsible for the security of those civilians.

He said the elderly and about 500 injured people trapped in the Azavastail factory were in urgent need of medicine and were not getting the treatment they needed.

“After 52 days of the blockade and heavy fighting, our medicine is running out,” Palamar said. There are also many corpses in our bunkers that need to be buried with dignity. We want to bury them in areas under Ukrainian control.”

Resistance fighters also want to leave if possible, but have no plans to surrender, he said. “No matter how much Russia promises, after surrendering it will forget everything and torture them severely,” he said.

A sergeant at the Ukrainian National Guard at the steel plant said they had only light weapons, such as machine guns and pistols, against Russian tanks, fighter jets, and artillery. He and his companions are hiding in a small concrete bunker two meters below the ground.

Analysts have suggested that Putin’s directive to “prevent a fly from escaping” could become a “death sentence” for besieged Ukrainian troops, even if Russian forces continue to fire indiscriminately at the factory.