Headlines
Redwan Rahman graduates from FilmdomThe local government minister has instructed to cut the road if necessary to remove the waterRequest to withdraw closure shop at night till EIDThe days of the Western monolithic world are over: PutinLeaders of Germany, France, and Italy in Kyiv to express solidarity‘Presidents of two countries call and pressurized Mbappé’Two U.S. citizens are thought to be missing or taken prisoner in UkraineCOVID: The technical committee suggested lifting some restrictionsPetrol prices hit record highs in the USCanada wants a stern warning against cigarettesThe task force to protect the mountains, demanded the formation of a speedy trial tribunalDepot fire: CID tries to find the cause on CCTVRussian passports are being issued in occupied UkraineFire on Parabat Express: Railroad to Sylhet is normal after 4 hoursAnother 24 children died in Mariupol, Ukraine said
Home More Education Medium will also be in full swing soon: Education Minister
Facebook
Twitter
WhatsApp
Print 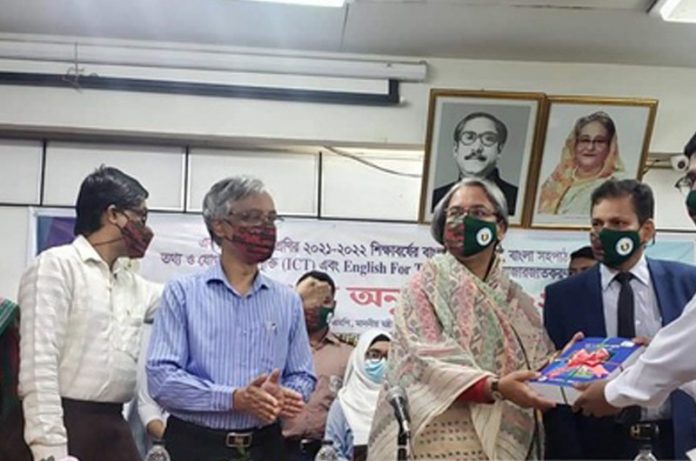 Staff Reporter: Education Minister Dipu Moni hopes that the coronavirus infection will be reduced and the secondary education activities will return to normal soon after the commencement of primary classes.

After a month-long shutdown by Omicron, classes began on February 22 at secondary, higher secondary, and higher education institutions. Elementary students also returned to class on Wednesday after six weeks.

As announced earlier, elementary students will take classes in all subjects every day in two shifts.

Dipu Moni was confronted by reporters at Dhaka College on Wednesday at the inaugural function of Orientation for Class XI in the new academic year and distribution of Bangabandhu’s unfinished autobiography among the students.

He said, “Elementary classes started from today. We will try to get our medium back to normal soon. ”

Stating that efforts are being made to reduce the deficit created by the closure of educational institutions due to the epidemic, the education minister said, “There have been many disruptions in their studies in the last two years. Many have gone through a kind of family-social trauma.

He also said that discussions would be held with the universities to reduce the shortage of higher secondary students.

“Those who will go to university, if there is a deficit in the subject of the previous class in the subject they will be studying – if they can get the class done by doing an initial assessment of it, then the students will be able to make up for it.”

Asked by reporters about the fact that not all high school students have received books yet, the minister said, Even then we tried. I hope the students will get the books soon. ”