Headlines
The local government minister has instructed to cut the road if necessary to remove the waterRequest to withdraw closure shop at night till EIDThe days of the Western monolithic world are over: PutinLeaders of Germany, France, and Italy in Kyiv to express solidarity‘Presidents of two countries call and pressurized Mbappé’Two U.S. citizens are thought to be missing or taken prisoner in UkraineCOVID: The technical committee suggested lifting some restrictionsPetrol prices hit record highs in the USCanada wants a stern warning against cigarettesThe task force to protect the mountains, demanded the formation of a speedy trial tribunalDepot fire: CID tries to find the cause on CCTVRussian passports are being issued in occupied UkraineFire on Parabat Express: Railroad to Sylhet is normal after 4 hoursAnother 24 children died in Mariupol, Ukraine saidBelayet, who is in his fifties, has been given a good admission test against young
Home Sports Messi is the first to combine 5 of that day and 5...
Facebook
Twitter
WhatsApp
Print 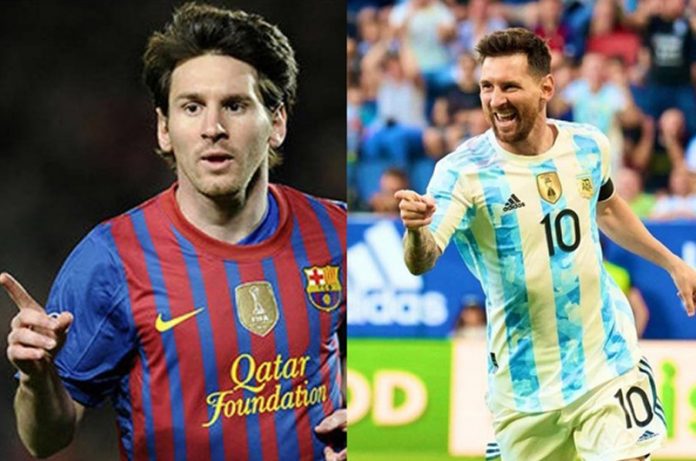 Sports Desk: The distance in time shift is more than 10 years. However, Lionel Messi appeared as the same Rudra. He scored 5 goals in Barcelona’s jersey, this time in Argentina’s Jersey. In it, he built a reputation that no one else in the history of football.

Regardless of the opponent or the context, 5 goals in a match alone is not easy at all. Thousands of footballers have never tasted this in their careers. He did that in two stages in top-level football.

In the second leg of the last 16 against Bayer Leverkusen in the 2012 Champions League, Messi also ignited in this way. The Argentine magician scored five goals in Barcelona’s 7-1 win that day. He brought back those memories and scored all the goals in Argentina’s 5-0 win over Estonia in a friendly on Sunday.

In that, he too has risen to new heights. Messi is the first footballer to score five goals in a single match in senior football, both in the Champions League (European Cup) and international football.