Headlines
Redwan Rahman graduates from FilmdomThe local government minister has instructed to cut the road if necessary to remove the waterRequest to withdraw closure shop at night till EIDThe days of the Western monolithic world are over: PutinLeaders of Germany, France, and Italy in Kyiv to express solidarity‘Presidents of two countries call and pressurized Mbappé’Two U.S. citizens are thought to be missing or taken prisoner in UkraineCOVID: The technical committee suggested lifting some restrictionsPetrol prices hit record highs in the USCanada wants a stern warning against cigarettesThe task force to protect the mountains, demanded the formation of a speedy trial tribunalDepot fire: CID tries to find the cause on CCTVRussian passports are being issued in occupied UkraineFire on Parabat Express: Railroad to Sylhet is normal after 4 hoursAnother 24 children died in Mariupol, Ukraine said
Home More Expatriation Mourning for the family of Jyoti who was shot dead in New...
Facebook
Twitter
WhatsApp
Print 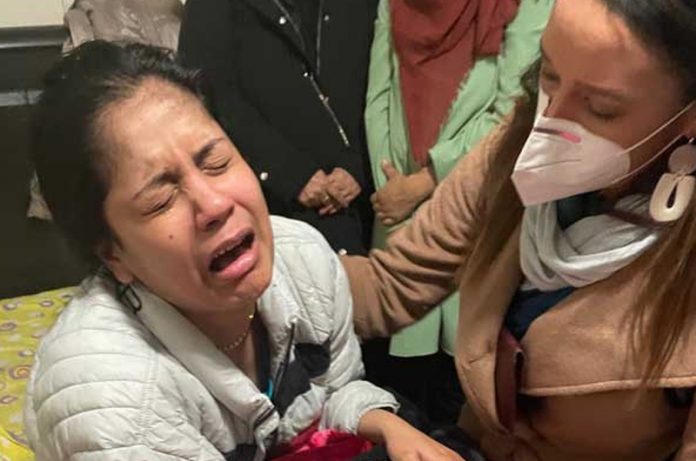 Md. Ashraful Islam: The family of Jyoti, a Bangladeshi who was shot dead in front of his house on Forbel Street in New York, is still reeling from the loss of his only earner.

A visit to the home on Ozonpark City Line in New York City on Wednesday revealed that his wife, Tauhida Islam Trisha, had lost her husband. Standing next to the four-year-old boy, silent.

Bivore’s mother and brother mourn the untimely death of their son. Her father was scheduled to return from Bangladesh on Sunday.

He was devastated by the news of his son’s death two days ago. Jyoti’s burial will be decided when he returns to New York.

Jyoti, 38, lives in Manikganj. He was an employee of John F. Kennedy Airport in New York. He lived with his family on Forbel Street.

According to the American media CBS News, the police went thereafter receiving the news of the shooting at around 1:15 pm. There they find Jyoti unconscious. He was shot in the head.

Jyoti was rushed to a Jamaican hospital, where he was pronounced dead at the scene.

Police could not say who shot Jyoti or for what reason.

On the news of his death, Majeda A Uddin, a resident of the Bangladesh community, went there on Wednesday afternoon to offer condolences to Jyoti’s family. There he talks to family members and listens to everything.

Family members told Majeda that Jyoti and his wife Trisha had an interview on February 10 to get US citizenship. But at night, the assassin’s shots turned everything upside down. Community members have taken the initiative to raise funds for bereaved families.

Mohammed Kaiser, a local, said: “I have heard gunshots more than once in the last few weeks. Today (Wednesday) while I was parking the car, the police came and asked if I had heard anything. I said yes. “

Jyoti Khairul Islam Khokon, a local from Bangladesh, who was shot dead in New York, said he thought Jyoti had been killed for hijacking a car.

“Gun violence is on the rise, it needs to stop,” he said.

However, the killers did not take his car, even though they killed Jyoti and fled.

The area of ​​Ozone Park along the border between Brooklyn and Queens is known as the City Line. Maulana Alauddin Akhanji and Tara Mia, two Bangladeshis, were shot dead on the city line on the way back after prayers at the mosque on August 13, 2016.

Alauddin was the imam of the Al-Forkan Jame Mosque in the Ozone Park area. His home is in Chunarughat upazila of Habiganj district in Bangladesh. Alauddin’s friend Tara Mia’s house is in Jangalhata of Golapganj in Sylhet.

Earlier, Nazmul Islam, vice-president of the United States Awami League, was stabbed to death on July 9, 2014.