Headlines
Redwan Rahman graduates from FilmdomThe local government minister has instructed to cut the road if necessary to remove the waterRequest to withdraw closure shop at night till EIDThe days of the Western monolithic world are over: PutinLeaders of Germany, France, and Italy in Kyiv to express solidarity‘Presidents of two countries call and pressurized Mbappé’Two U.S. citizens are thought to be missing or taken prisoner in UkraineCOVID: The technical committee suggested lifting some restrictionsPetrol prices hit record highs in the USCanada wants a stern warning against cigarettesThe task force to protect the mountains, demanded the formation of a speedy trial tribunalDepot fire: CID tries to find the cause on CCTVRussian passports are being issued in occupied UkraineFire on Parabat Express: Railroad to Sylhet is normal after 4 hoursAnother 24 children died in Mariupol, Ukraine said
Home Country Muhibullah had been murdered to become important: police
Facebook
Twitter
WhatsApp
Print 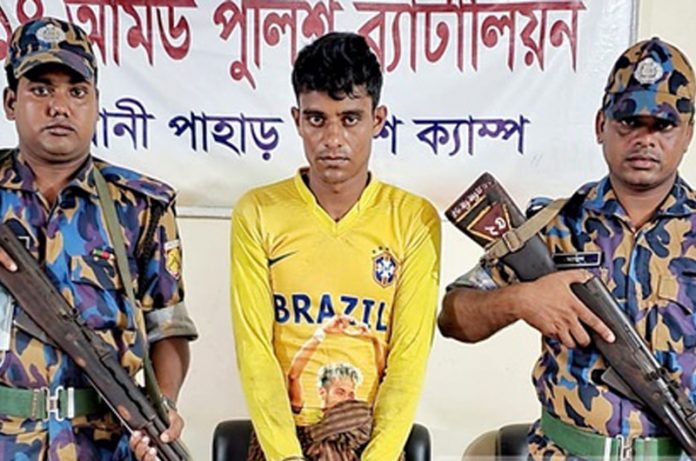 Cox’s Bazar Representative: Police say Rohingya leader Muhammad Muhibullah was killed in a premeditated killing to “stop” him as he became more important in the refugee camp.

This information was given by the commander of 14 APBN (Armed Police Battalion) Superintendent of Police Mohammad Naimul Haque at a press conference on Saturday on the basis of preliminary interrogation of a person arrested on suspicion of being directly involved in Muhibullah’s murder.

He told a news conference at his office in Ukhia, Cox’s Bazar, on Saturday afternoon that four more people had been arrested on suspicion of involvement in the killings.

He also said that one of them had given a confessional statement in the court.

In a written statement at the press conference, the superintendent of police said, “Azizul Haque, who was arrested during interrogation, said that a meeting was held on the night of September 26 in Morokaz hill, Lombasia, two days before Muhibullah was killed. Azizul and four others were present there.

At that meeting, the top leaders of the so-called miscreants ordered Muhibullah to be killed. The reason is that Muhibullah has become a great leader. This person who is trying to bring back the Rohingyas to his homeland is becoming more important day by day. He must be stopped. There was a plan to kill Muhibullah. “

Muhammad Muhibullah, chairman of the Arakan Rohingya Society for Peace and Human Rights, was shot dead in his own office at the Lambasia Rohingya camp in Ukhia, Cox’s Bazar, on the night of September 29. His organization is working to repatriate Rohingyas with dignity.

The 48-year-old Rohingya leader was killed for working for repatriation, according to various sources.

It was informed at the press conference that APBN members arrested a Rohingya named Azizul Haque with a one-shooter gun from Umbia’s Lombashia camp area around 4 am on Saturday. The APBN captain claimed that the man was directly involved in Muhibullah’s murder.

According to the information given by Azizul. Rashid alias Murshid Amin, Md. Anas and Nur Mohammad were arrested by a specialized police unit.

It was also informed at the press conference that Azizul made a confessional statement in the court of Cox’s Bazar Senior Judicial Magistrate Jerin Sultana this afternoon.

They claim that Arsa leaders have been threatening Muhibullah for a long time. However, the existence of Arsa in Bangladesh is not being acknowledged by the police. Arsa or Arakan Republican Salvation Army is an armed organization of Rohingyas in Rakhine, Myanmar. There are allegations of killing, threatening, looting, and extortion in the Rohingya camps in the name of Arsar.

At the press conference, the APBN captain gave a description of the time of the murder with the information of the preliminary interrogation of the arrested persons.

Police said, “On the night of September 29, Murshid Amin (arrested) called him out when he returned to his shed in Muhibullah camp after Esha prayers. Muhibullah was told that some people wanted to talk about repatriation. This Rohingya leader came out of his shed and sat in the office. This information Md. Murshid Amin informed Anas and Nur Mohammad.

At that time, Anas and Noor signaled Muhibullah’s position by signaling the main killers of the party. The miscreants were already stationed in a papaya garden. Upon receiving the signal, seven masked men came to Muhibullah’s office. Three entered the office, four stood at the door. Muhibullah was sitting in a chair inside the office with 10/15 people. When Muhibullah got up from his chair, three armed men fired four shots. Then they fled through the Pepebagan again. “

The press conference was informed that APBN had earlier arrested four Rohingyas in connection with Muhibullah’s murder. Md. A man named Elias made a confessional statement in court.