Headlines
Redwan Rahman graduates from FilmdomThe local government minister has instructed to cut the road if necessary to remove the waterRequest to withdraw closure shop at night till EIDThe days of the Western monolithic world are over: PutinLeaders of Germany, France, and Italy in Kyiv to express solidarity‘Presidents of two countries call and pressurized Mbappé’Two U.S. citizens are thought to be missing or taken prisoner in UkraineCOVID: The technical committee suggested lifting some restrictionsPetrol prices hit record highs in the USCanada wants a stern warning against cigarettesThe task force to protect the mountains, demanded the formation of a speedy trial tribunalDepot fire: CID tries to find the cause on CCTVRussian passports are being issued in occupied UkraineFire on Parabat Express: Railroad to Sylhet is normal after 4 hoursAnother 24 children died in Mariupol, Ukraine said
Home Headlines Muhith will return to his hometown Sylhet after paying his last respects...
Facebook
Twitter
WhatsApp
Print 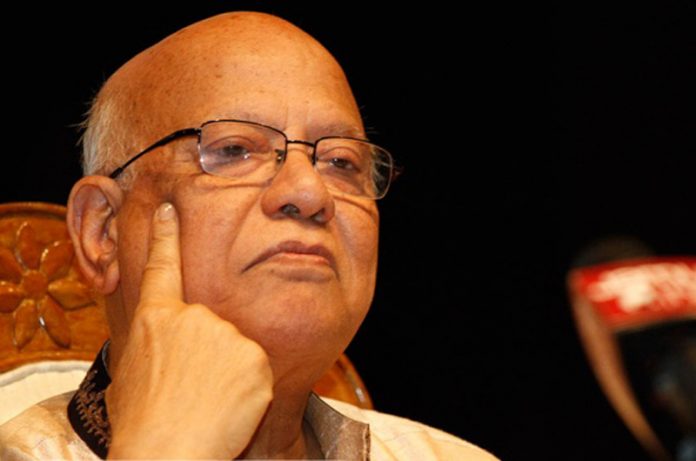 Earlier, the body would be taken to the central Shaheed Minar in the capital Dhaka at 2 pm on Saturday to pay homage to people of all walks of life, the foreign ministry said in a statement.

According to Foreign Minister AK Abdul Momen, Muhith’s younger brother, Muhith’s first janaza will be held at 10:30 am at Gulshan Azad Mosque and the second janaza at Sangsad Plaza at 11:30 am.

His body will be taken to the central Shaheed Minar at 2 pm to pay homage to people of all walks of life. The body will then be taken to Sylhet for burial.

Muhith, a senior member of the Awami League, died at the United Hospital in Dhaka at 12:57 pm on Friday. He had been suffering from geriatric complications for some time.

Muhith, who was born in Sylhet on January 25, 1934, and entered politics, has given a maximum budget of 12 times in Parliament.

A former MP elected from Awami League in Sylhet-1 constituency, he served as the Finance Minister for two terms from 2009 to 2018.

He had earlier served as Minister of Finance and Planning in the Ershad government in 1982 and 1983.