Headlines
Redwan Rahman graduates from FilmdomThe local government minister has instructed to cut the road if necessary to remove the waterRequest to withdraw closure shop at night till EIDThe days of the Western monolithic world are over: PutinLeaders of Germany, France, and Italy in Kyiv to express solidarity‘Presidents of two countries call and pressurized Mbappé’Two U.S. citizens are thought to be missing or taken prisoner in UkraineCOVID: The technical committee suggested lifting some restrictionsPetrol prices hit record highs in the USCanada wants a stern warning against cigarettesThe task force to protect the mountains, demanded the formation of a speedy trial tribunalDepot fire: CID tries to find the cause on CCTVRussian passports are being issued in occupied UkraineFire on Parabat Express: Railroad to Sylhet is normal after 4 hoursAnother 24 children died in Mariupol, Ukraine said
Home More Metropolitan Muktijoddha Sontan Sangsad’s human chain in 7 demands including quota reinstatement
Facebook
Twitter
WhatsApp
Print 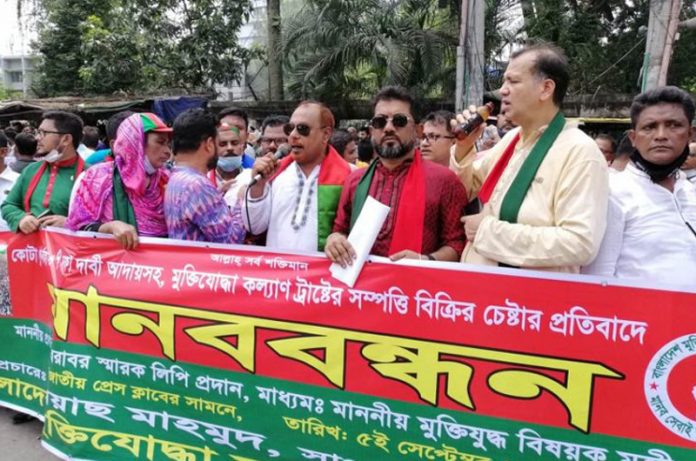 Senior Reporter: Bangladesh Muktijoddha Sontan Sangsad has organized a human chain demanding 7 points including reinstatement of 30 percent quota. At the same time, the human chain also protested against the attempt of Muktijoddha Welfare Trust to sell its property.

Their demands are that in order to prevent corruption, the quota of 30 percent freedom fighters should be maintained and implemented according to the qualifications of the children and grandchildren of the freedom fighters. Dignity must be determined by passing constitutional recognition and protection of freedom fighter families. Heroic freedom fighters should be given VIP status in all fields including hospitals, government offices, airports. Muktijoddha Welfare Trust should be transformed into a for-profit organization by eliminating the idea of ​​selling abandoned property. Bangladesh Muktijoddha Sontan Sangsad Central Command Council is ready to provide all kinds of assistance to protect the abandoned property and make it profitable.

Other demands of the organization include that a representative of the family of a martyred or dead heroic freedom fighter and a sick heroic freedom fighter should vote in the Muktijoddha Sangsad elections and replace the so-called mazar or grave from the demarcated boundary of the Jatiya Sangsad Bhaban. In order to protect the honor of Mujib Kot, a law has to be passed to ban the wearing of Mujib’s coat in movies and serials. In Tangail, heroic freedom fighter Farooq Ahmed and heroic freedom fighter Abdul Latif Khan, hero’s son Major Sinha and ASP Anisul Karim Shipon will have to take strict legal action against attacks on freedom fighters’ families and land grabbing across the country, including planned murder trials. Strict laws need to be enacted to continue the campaign against corruption, drugs, rape, and to control the market for daily commodities.