Headlines
Redwan Rahman graduates from FilmdomThe local government minister has instructed to cut the road if necessary to remove the waterRequest to withdraw closure shop at night till EIDThe days of the Western monolithic world are over: PutinLeaders of Germany, France, and Italy in Kyiv to express solidarity‘Presidents of two countries call and pressurized Mbappé’Two U.S. citizens are thought to be missing or taken prisoner in UkraineCOVID: The technical committee suggested lifting some restrictionsPetrol prices hit record highs in the USCanada wants a stern warning against cigarettesThe task force to protect the mountains, demanded the formation of a speedy trial tribunalDepot fire: CID tries to find the cause on CCTVRussian passports are being issued in occupied UkraineFire on Parabat Express: Railroad to Sylhet is normal after 4 hoursAnother 24 children died in Mariupol, Ukraine said
Home Headlines Multiple explosions shake Kyiv, Severodonetsk ‘recaptures’
Facebook
Twitter
WhatsApp
Print 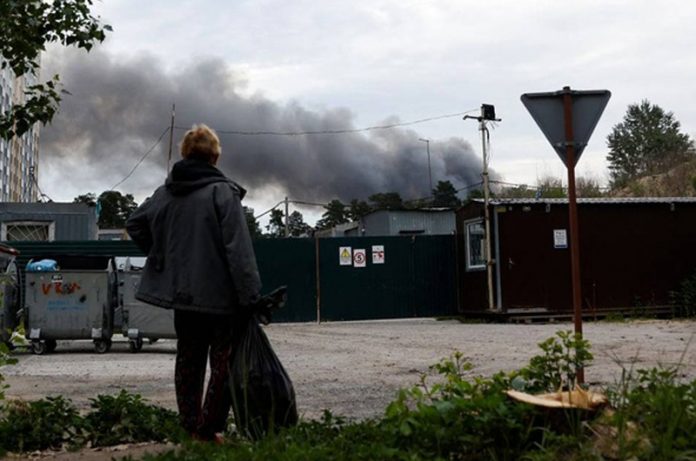 Md. Ashraful Islam: Kyiv, the capital of Ukraine, has been hit by multiple explosions, the city’s mayor Vitaly Klitsko has reported.

An eyewitness said smoke was seen in the city after the blasts on Sunday.

The bomber struck shortly after noon in Kyiv, claiming the Ukrainian army had recaptured parts of the eastern city of Severodonetsk.

The bomber struck shortly after noon in front of police recruiting center in the northern city of Kyiv, according to Reuters.

“Several explosions have taken place in the capital’s Darnitsky and Daniprovsky districts. People from different departments have already reached the spot and started working. I will tell you the details later, “Klitsko wrote in the messaging app Telegram.

Earlier in the day, Ukrainian officials claimed that Russian forces had retreated from their counter-attack in the strategically important city of Severodonetsk in the east.

Officials say Ukraine controlled 30 percent of Severodonetsk before Saturday; But in a counter-attack, they recaptured another 20 percent.

“Exciting, complicated situation. There is a shortage of food, fuel, and medicine. In the meantime, our troops are doing everything possible to drive the enemy out of the city, “said Alexander Striak, the mayor of Severodonetsk.

On Saturday, there was a fierce battle between the two sides; Both sides fired artillery shells, he said.

The Russian military says its advance in Severodonets has continued and that Ukraine’s troops and equipment have suffered heavy casualties.

Reuters could not independently verify the claims of either side.

Russia, which launched a campaign in the neighboring country in the last week of February to disarm and “liberate” Ukraine, has in recent months focused on “liberating exiles.”

If Severodonetsk and Lisichansk were taken over, the whole of Luhansk would fall to them. The provinces of Luhansk and Donetsk together; One of the goals set by Russia at the start of the “special military operation” was to remove Ukrainian troops from Donbas and establish full control of pro-Moscow separatists there.