Headlines
Redwan Rahman graduates from FilmdomThe local government minister has instructed to cut the road if necessary to remove the waterRequest to withdraw closure shop at night till EIDThe days of the Western monolithic world are over: PutinLeaders of Germany, France, and Italy in Kyiv to express solidarity‘Presidents of two countries call and pressurized Mbappé’Two U.S. citizens are thought to be missing or taken prisoner in UkraineCOVID: The technical committee suggested lifting some restrictionsPetrol prices hit record highs in the USCanada wants a stern warning against cigarettesThe task force to protect the mountains, demanded the formation of a speedy trial tribunalDepot fire: CID tries to find the cause on CCTVRussian passports are being issued in occupied UkraineFire on Parabat Express: Railroad to Sylhet is normal after 4 hoursAnother 24 children died in Mariupol, Ukraine said
Home Country Musa ‘confessed’, police claim
Facebook
Twitter
WhatsApp
Print 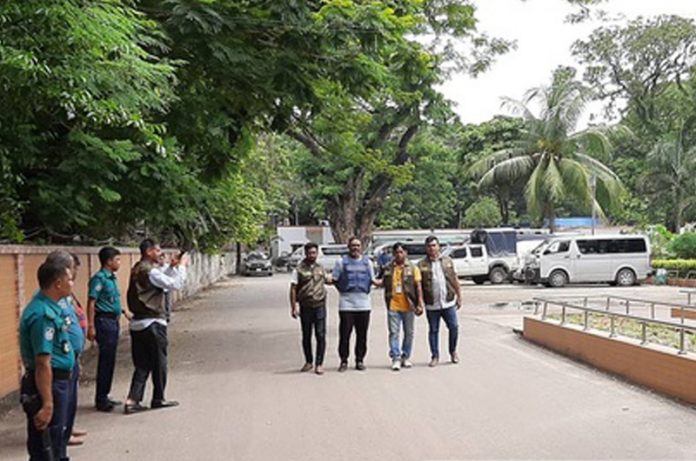 Senior Reporter: Former Awami League leader Zahidul Islam Tipu of Motijheel, Sumon Sikder Musa, who was repatriated from Oman, has “admitted in a preliminary interrogation” that he was involved in a plot to assassinate him, police said.

AKM Hafeez Akhter, Additional Commissioner of Dhaka Metropolitan DB Police, told a news conference on Friday, “Initially, he confessed to being involved in the plot. He will be produced in court today and will be remanded in custody for 15 days.

In response to a question, intelligence official Hafeez said that besides Musa, 12 others had been arrested in connection with the murder. They are in jail.

“They will be remanded in custody and further information will be sought. Only then can it be ascertained who directed the killings and who else was involved. “

Musa Oman, one of the suspects in Tipu’s murder, was arrested by Interpol and brought back to the country on Thursday. After landing in Dhaka, he was taken to the DB office.

Former general secretary of Motijheel Thana Awami League Zahidul Islam Tipu was shot dead in a traffic jam at Shajahanpur in the capital on the night of March 24.

A man on a motorcycle approached Tipu’s car and shot him. At that time, college student Samia Afran, who was in a rickshaw next to Tipu’s car, was shot dead. Tipu’s driver Munna was also shot.

After that incident, Musa left Dubai for Oman. After the name Musa came up in the investigation of this case, the police of Bangladesh wanted the cooperation of Interpol to catch him. He was arrested in Oman on May 12, but the case was reported in Bangladesh on June 3.

The case, filed by Tipu’s wife Farhana Islam Dolly, a local women’s ward councilor after the murder, did not name anyone on the list of accused.

Later on the night of March 26, a man named Masum Mohammad alias Akash was arrested from Bogra and according to the detective police, the same person shot Tipu. Later, another person named Arfan Ullah Damal was arrested with weapons from Kamalapur.

RAB had said at the time that some local Awami League leaders, including Omar Farooq, had planned to assassinate Tipu to avoid a conflict of dominance over extortion and tenders, revenge for the murder of Reazul Haque Milky and the murder of Bocha Babu. The budget was 15 lakh rupees.

According to investigators, Musa was acting as a “link between politics and the criminal world.” He also coordinated the criminal connections between Dhaka and Dubai.

Musa left for Dubai 12 days before the assassination. The assassination plan and all the instructions were given from there. The message that the killing mission was over also reached Dubai.

Then last month the news came that Musa had gone to Oman from Dubai. The police headquarters also confirmed that Musa had left Dubai for Oman.

Later, Bangladesh Police started contacting Interpol to arrest Musa. At one point, Musa was arrested, and a three-member police team went to Oman on June 5 to bring him back. From there, he returned home on 9 June.