Headlines
Redwan Rahman graduates from FilmdomThe local government minister has instructed to cut the road if necessary to remove the waterRequest to withdraw closure shop at night till EIDThe days of the Western monolithic world are over: PutinLeaders of Germany, France, and Italy in Kyiv to express solidarity‘Presidents of two countries call and pressurized Mbappé’Two U.S. citizens are thought to be missing or taken prisoner in UkraineCOVID: The technical committee suggested lifting some restrictionsPetrol prices hit record highs in the USCanada wants a stern warning against cigarettesThe task force to protect the mountains, demanded the formation of a speedy trial tribunalDepot fire: CID tries to find the cause on CCTVRussian passports are being issued in occupied UkraineFire on Parabat Express: Railroad to Sylhet is normal after 4 hoursAnother 24 children died in Mariupol, Ukraine said
Home Sports Mushfiqur doesn’t want to keep T20 anymore
Facebook
Twitter
WhatsApp
Print 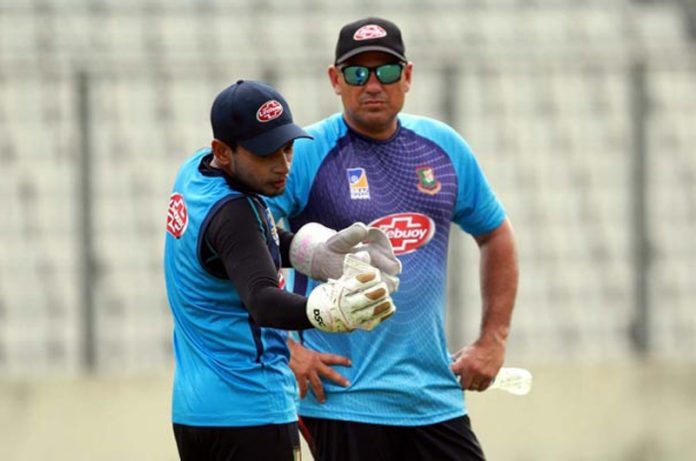 Sports Reporter: Mushfiqur Rahim’s thoughts on keeping have changed. Therefore, the decision of the team management of Bangladesh has also changed. Mushfiqur is reluctant to keep in T20 cricket, said Bangladesh coach Russell Domingo. So for now, Nurul Hasan Sohan and Liton Das are in the planning of the team.

In the third match of the series against New Zealand, many questions and rumors started after Sohan came on the field wearing keeping gloves on Sunday. Mushfiqur’s decision to keep in the third and fourth match according to the decision before the start of the series!

Russell Domingo explained the reason for not keeping Mushfiqur after the match.

“It simply came to our notice then. Initially, I talked to Mushfiqur, he was supposed to keep him after the second match. But Mushfiqur told me he probably didn’t want to keep the T20 anymore. ”

“We have to move forward. I don’t think Mushfiqur has a strong desire to keep this version. So in this series, we have to focus on Sohan and maybe Liton to fulfill this responsibility. ”

The most talked about event before the start of this series was the decision to share and keep Mushfiqur and Sohan. In a virtual press conference last Monday, Domingo said that Sohan will be keeping in the first two matches of the series, Mushfiqur in the next two matches. Then they will decide on the last match.

That decision provided a lot of discussion and criticism.

The day before the start of the series, captain Mahmudullah also said that both Mushfiqur and Sohan have taken the decision positively and both are happy.

In the end, Mushfiqur decided his own keeping fate.

Mushfiqur has not been keeping regular tests since 2019. Currently, only in ODIs so he is a regular keeper.