Headlines
Redwan Rahman graduates from FilmdomThe local government minister has instructed to cut the road if necessary to remove the waterRequest to withdraw closure shop at night till EIDThe days of the Western monolithic world are over: PutinLeaders of Germany, France, and Italy in Kyiv to express solidarity‘Presidents of two countries call and pressurized Mbappé’Two U.S. citizens are thought to be missing or taken prisoner in UkraineCOVID: The technical committee suggested lifting some restrictionsPetrol prices hit record highs in the USCanada wants a stern warning against cigarettesThe task force to protect the mountains, demanded the formation of a speedy trial tribunalDepot fire: CID tries to find the cause on CCTVRussian passports are being issued in occupied UkraineFire on Parabat Express: Railroad to Sylhet is normal after 4 hoursAnother 24 children died in Mariupol, Ukraine said
Home Headlines Musk will lift Trump’s ban on Twitter
Facebook
Twitter
WhatsApp
Print 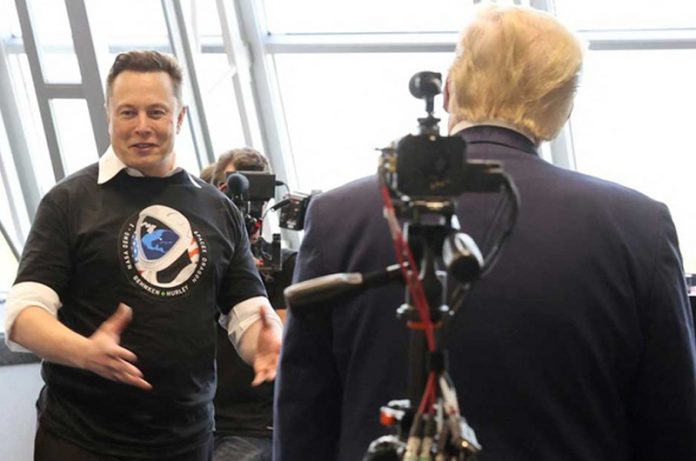 Md. Ashraful Islam: Elon Musk, CEO of Tesla, and the future owner of Twitter may withdraw the ban that Twitter imposed on former US President Donald Trump in the wake of the Capitol Hill riots in Washington.

Musk made the remarks at a Financial Times Future of the Car conference on Wednesday, Reuters reported.

However, there was no immediate reaction from Twitter. None of Trump’s spokesmen said anything.

Musk, who claims to be the “biggest supporter of freedom of speech”, recently reached an agreement to buy Twitter for 4.4 billion.

Mask, who joined the microblogging site in 2009, is also a very active user. At present, he has more than eight crore followers.

He often posts on Twitter to give fans hints or various announcements about Tesla’s internal affairs. However, recently he has also sharply criticized various policies of this medium.

“Twitter has failed to uphold the rules of freedom of speech and is undermining democracy,” Musk tweeted.

There has also been criticism over the years of how social media has been manipulating the accounts of powerful world leaders.

Donald Trump has been permanently banned from Twitter for allegedly inciting US supporters to attack the US Capitol on January 8 last year. Trump had 76 million followers on that account.

Announcing the ban before Trump’s term expires, Twitter said the decision was made to avoid “the risk of provoking more violence” in the United States.

In Musk’s words, however, the ban was “morally wrong and foolish.”

Trump has said he is not returning to Twitter despite the ban; Instead, he is more interested in his own network, Truth Social.

“I’m not going to Twitter,” Trump told Fox News. I will stay in the truth. ”

However, the former US president believes that Musk is a “good man” and that he will “improve” Twitter.

Human rights groups, however, are skeptical. Many believe that Musk’s monopoly on Twitter will “facilitate” hate speech in the name of freedom of speech.

Amnesty International says it does not want to see Twitter, which deliberately, ignore violent and abusive behavior towards users.