Headlines
Redwan Rahman graduates from FilmdomThe local government minister has instructed to cut the road if necessary to remove the waterRequest to withdraw closure shop at night till EIDThe days of the Western monolithic world are over: PutinLeaders of Germany, France, and Italy in Kyiv to express solidarity‘Presidents of two countries call and pressurized Mbappé’Two U.S. citizens are thought to be missing or taken prisoner in UkraineCOVID: The technical committee suggested lifting some restrictionsPetrol prices hit record highs in the USCanada wants a stern warning against cigarettesThe task force to protect the mountains, demanded the formation of a speedy trial tribunalDepot fire: CID tries to find the cause on CCTVRussian passports are being issued in occupied UkraineFire on Parabat Express: Railroad to Sylhet is normal after 4 hoursAnother 24 children died in Mariupol, Ukraine said
Home International Myanmar releases thousands of political prisoners
Facebook
Twitter
WhatsApp
Print 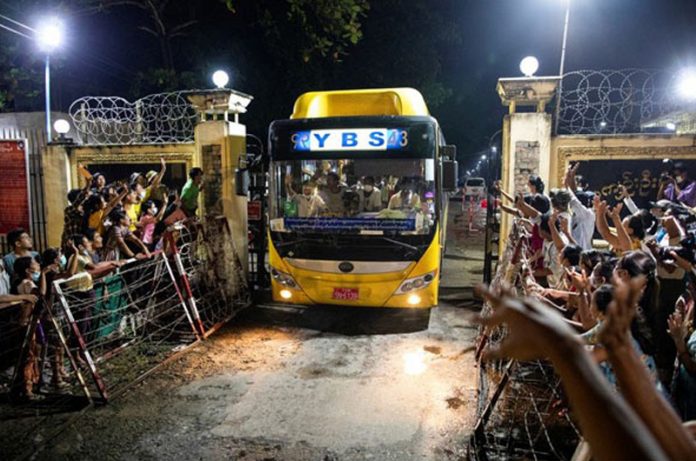 Numerous political prisoners, including former MPs and journalists, were also released from jails in Mandalay, Lacio, Meiktila, and Mayik on Monday.

However, the Democratic Voice of Burma reports that 11 of the 36 people released from Meiktila prison have been re-arrested. The news agency Reuters could not immediately confirm whether the information was accurate.

Earlier, after state Prime Minister Min Aung Hlaing’s speech, Myanmar’s state television said more than 5,600 protesters with arrest warrants and arrest warrants were being pardoned and pardoned for their involvement in anti-coup protests.

The release and pardon is a new move to save the image of the ruling military government in the international arena, say many pro-democracy activists, after the Southeast Asian Association for Regional Cooperation (ASEAN) took a rare step to exclude Myanmar’s junta leader from their summit.

UN Special Rapporteur Tom Andrews welcomes the release of thousands of political prisoners in Myanmar; When they were first arrested, it was “disgusting,” he said on Twitter, according to a Reuters report.

“Myanmar’s junta is releasing political prisoners, not because they have changed their minds, but because they are leaving under pressure,” he said.

A recent ASEAN ministerial meeting decided to invite a non-political representative from Myanmar to the summit to be held on October 26-27.

Many believe that the rare decision was a “reprimand” to Aung San Suu Kyi, who was ousted from power in February.

“They (prison authorities) come to me today and say they are taking me home, that’s all,” Aung San Suu Kyi, a spokeswoman for the National League for Democracy (NLD), told local media Democratic Voice of Burma on her way home from prison on Monday night. Aung Shin.

He was arrested on February 1, the day of the coup, and was released after spending more than six months in prison.

Numerous photos and videos circulating on social media showed the released prisoners reuniting with their family members in tears.

Several pictures showed passengers leaning against the windows of multiple buses exiting through the back gates of the jail, waving to a large crowd outside, Reuters reported.

A spokesman for Myanmar’s prisons department and a spokesman for the military junta did not immediately return calls seeking comment.

After decades of democratic and economic reform, a coup earlier this year has plunged Myanmar back into turmoil.