Headlines
Redwan Rahman graduates from FilmdomThe local government minister has instructed to cut the road if necessary to remove the waterRequest to withdraw closure shop at night till EIDThe days of the Western monolithic world are over: PutinLeaders of Germany, France, and Italy in Kyiv to express solidarity‘Presidents of two countries call and pressurized Mbappé’Two U.S. citizens are thought to be missing or taken prisoner in UkraineCOVID: The technical committee suggested lifting some restrictionsPetrol prices hit record highs in the USCanada wants a stern warning against cigarettesThe task force to protect the mountains, demanded the formation of a speedy trial tribunalDepot fire: CID tries to find the cause on CCTVRussian passports are being issued in occupied UkraineFire on Parabat Express: Railroad to Sylhet is normal after 4 hoursAnother 24 children died in Mariupol, Ukraine said
Home International NATO membership: Swedish PM rejects referendum proposal
Facebook
Twitter
WhatsApp
Print 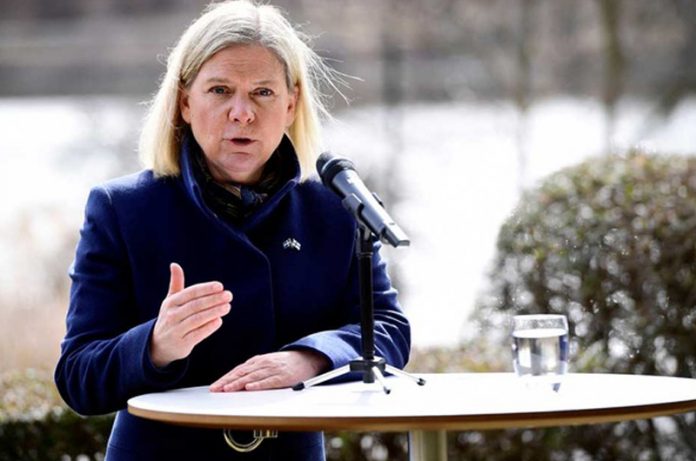 News Desk: The Swedish government has no plans to hold a referendum on the application for membership in the US-led military alliance Neto, said Prime Minister Magdalena Andesen.

Andesen told reporters on Tuesday that the country’s parliament had decided to proceed with the petition.

Russia’s invasion of Ukraine has forced Sweden and Finland to reconsider their long-held belief that “military neutrality is in the national interest”, Reuters reports.

Both countries are expected to apply for NATO membership in the next few weeks.

Andesen called the proposal to hold a referendum on the membership application a “bad idea”.

“I do not think this issue is suitable for a referendum. There is a lot of national security information that is confidential, there are some important issues in such a referendum that cannot be discussed, and important information cannot be brought to the negotiating table, ” he said.

Sweden’s parliament is now reviewing the country’s security policy, with a report due in mid-May.

Andesen’s own party, the Social Democrats, is also considering lifting its objection to Neto’s membership.

Despite the support of a majority of members of the Swedish parliament, the ruling Social Democrats are seen as a major obstacle to Sweden’s bid for membership in the 30-nation NATO alliance.

The leader of the moderate opposition, the largest opposition party in parliament, has also rejected a proposal to hold a referendum on Neto’s membership.

“Voters don’t know anything about Russia. It is clear that the Swedish voters understood what happened on February 24, and their conclusions have been drawn, “said opposition leader Ulf Khristerson to the daily Aftonbladet during a debate with Left Party leader Nushi Dadgostar a few days ago.

The leader of the left-wing opposition to NATO membership, Dadgustar Aftonbladet, has said that Sweden should be given an opportunity to express its views on whether Sweden should join the US-led military alliance.

“It simply came to our notice then. Such a decision would require strong democratic support, “he said.

Sweden is due to hold general elections in September this year.

The results of a Demoscope survey on Neto membership were published in the daily Aftonblade on April 20. It found that 57 percent of Swedes were in favor of joining NATO; The support rate in March was 51 percent.