Headlines
Redwan Rahman graduates from FilmdomThe local government minister has instructed to cut the road if necessary to remove the waterRequest to withdraw closure shop at night till EIDThe days of the Western monolithic world are over: PutinLeaders of Germany, France, and Italy in Kyiv to express solidarity‘Presidents of two countries call and pressurized Mbappé’Two U.S. citizens are thought to be missing or taken prisoner in UkraineCOVID: The technical committee suggested lifting some restrictionsPetrol prices hit record highs in the USCanada wants a stern warning against cigarettesThe task force to protect the mountains, demanded the formation of a speedy trial tribunalDepot fire: CID tries to find the cause on CCTVRussian passports are being issued in occupied UkraineFire on Parabat Express: Railroad to Sylhet is normal after 4 hoursAnother 24 children died in Mariupol, Ukraine said
Home Headlines New bridge launched on Russia-China border
Facebook
Twitter
WhatsApp
Print 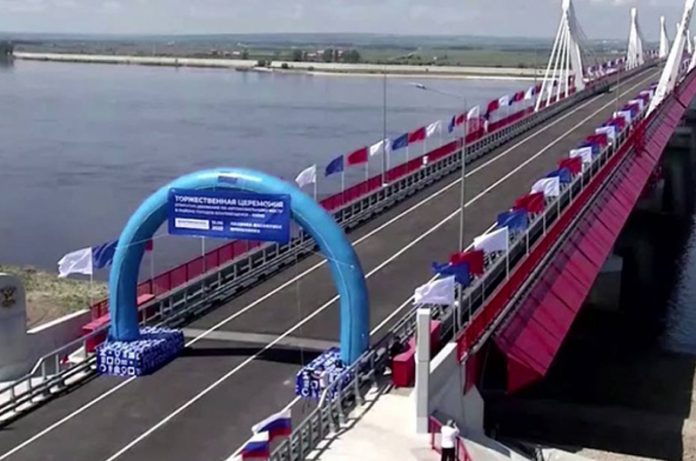 Md. Ashraful Islam: Russia and China have launched a new road bridge over the Amu Darya River on the eastern border. They hope the bridge will play an important role in boosting trade between the two neighboring countries, which are becoming increasingly close.

Russia, which is facing unprecedented Western sanctions over its military operation in Ukraine, is seeking to boost trade with its allies.

The one-kilometer-long bridge over the Amur River (known as Heilongjiang in China) cost 1,900 million rubles (কোটি 342 million), according to the RIA Novosti.

Citing video footage of the opening ceremony, the news agency Reuters reported that freight trucks traveled over the two-lane bridge between the two countries during the fireworks display. The bridge was decorated with festoons in the colors of the Russian and Chinese flags.

Russian officials say the bridge will deepen the Moscow-Beijing alliance by boosting trade.

Earlier in February, the two countries announced that there was “no limit” to their partnership. Russia launched an attack on its western neighbor Ukraine later that month.

Chinese Vice Premier Hu Jintao has said that China wants to deepen effective cooperation with Russia in all areas.

The BTS-MOST said the bridge would reduce the distance of Chinese goods to western Russia by 1,500 kilometers.

Russia said in April that it expects Chinese goods flow to increase and that trade with Beijing could reach বিল 200 billion by 2024.

China is a major buyer of Russian natural resources and agricultural products. China has refused to condemn Russia’s attack on Ukraine and has criticized Western sanctions against Moscow.