Headlines
Redwan Rahman graduates from FilmdomThe local government minister has instructed to cut the road if necessary to remove the waterRequest to withdraw closure shop at night till EIDThe days of the Western monolithic world are over: PutinLeaders of Germany, France, and Italy in Kyiv to express solidarity‘Presidents of two countries call and pressurized Mbappé’Two U.S. citizens are thought to be missing or taken prisoner in UkraineCOVID: The technical committee suggested lifting some restrictionsPetrol prices hit record highs in the USCanada wants a stern warning against cigarettesThe task force to protect the mountains, demanded the formation of a speedy trial tribunalDepot fire: CID tries to find the cause on CCTVRussian passports are being issued in occupied UkraineFire on Parabat Express: Railroad to Sylhet is normal after 4 hoursAnother 24 children died in Mariupol, Ukraine said
Home Economy New Market opened two days later
Facebook
Twitter
WhatsApp
Print 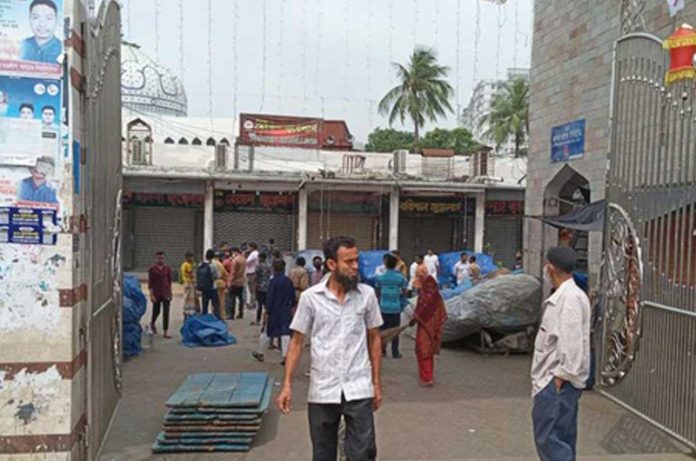 Md. Ashraful Islam: After two days of bloody clashes between traders and students of Dhaka College, the New Market and surrounding shops of the capital have started reopening.

After a long meeting between midnight and dawn on Wednesday, student and business representatives reached an agreement and decided to open the new market on Thursday. Then at 10 am, three of the four gates of New Market were opened.

Market security guard Nannu Khan said that gates number one, two, and three have been opened. Gate number four is broken and will be opened after repairs. The clash started on Monday night with gate number 4.

The matter came to a head that night when some employees of Dhaka College Chhatra League got involved in the trouble of the employees of two food shops named ‘Capital Hostel’ and ‘Welcome’. Clashes raged in the area throughout the day on Tuesday, injuring more than half a hundred people, and later killing two of them.

Inside New Market on Thursday morning, it was seen that all the shops except Welcome and Capital Hostel were preparing to open. An employee of a shoe store called ‘Sohag Shoes’ said, “The authorities asked me to open it, so I opened it, God willing.”

In addition to New Market, Chandrima Super Market and other shopping malls have also started opening. The shopkeepers are waiting for the buyer after clearing the goods.

There are about 10,000 shops in dozens of markets in the area from Science Laboratory to New Market. The traders were hoping to buy and sell better this EID after overcoming the impact of the epidemic.

All shops in the area were closed after the clashes began at midnight on Monday. Some shops were also attacked during the clashes on Tuesday.

When the situation calmed down, the leaders of the owners’ association announced the opening of the shop at a press conference on Wednesday afternoon. Gauchia, Balaka Bhavan, Chandni Chowk also started opening some shops. But after several hand grenades exploded in front of the gate of Dhaka College in the afternoon, that attempt was stopped.

After a four-hour meeting in the middle of the night, the agreement was reached, said Dhaka Education Board Director General Nehal Ahmed. He told reporters that all the shopping malls in the area, including New Market, would be open from Thursday. The college authorities will decide on the students’ stay in the hall during the holidays.

“I hope there will be no more divisions after the meeting. All the markets and shops in the vicinity including New Market will be open from this morning. Since the college is officially closed from today, the college authorities will decide on the issue of students staying in the hall. ”