Headlines
Redwan Rahman graduates from FilmdomThe local government minister has instructed to cut the road if necessary to remove the waterRequest to withdraw closure shop at night till EIDThe days of the Western monolithic world are over: PutinLeaders of Germany, France, and Italy in Kyiv to express solidarity‘Presidents of two countries call and pressurized Mbappé’Two U.S. citizens are thought to be missing or taken prisoner in UkraineCOVID: The technical committee suggested lifting some restrictionsPetrol prices hit record highs in the USCanada wants a stern warning against cigarettesThe task force to protect the mountains, demanded the formation of a speedy trial tribunalDepot fire: CID tries to find the cause on CCTVRussian passports are being issued in occupied UkraineFire on Parabat Express: Railroad to Sylhet is normal after 4 hoursAnother 24 children died in Mariupol, Ukraine said
Home Crime News of the ‘arrest’ of a police officer in India accused of...
Facebook
Twitter
WhatsApp
Print 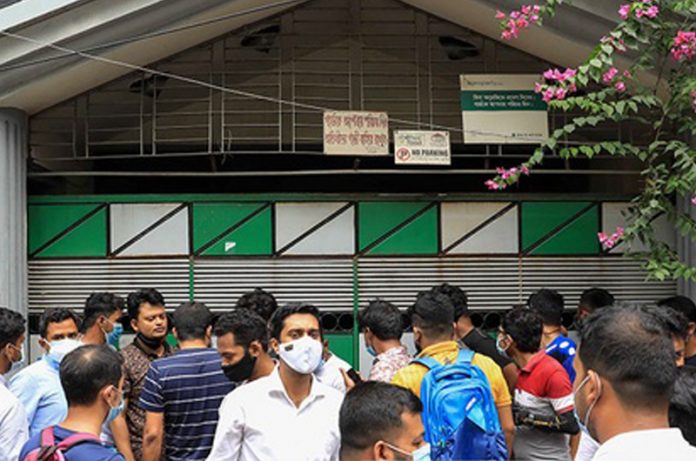 Senior Reporter: Sheikh Sohail Rana, an inspector (investigation) of the capital’s Banani police station, has been arrested at the Indo-Nepal border for allegedly ‘involvement’ with e-commerce company E-Orange, according to media reports.

However, the matter has not been confirmed by Border Guard Bangladesh (BGB), police, or any concerned authority yet.

In this regard, Deputy Commissioner of Gulshan Division Asaduzzaman said, “We have heard the news of arrests outside the country. However, no authority has confirmed it. ”

“She did not go to the office on Friday,” he said. The search was not held as Friday was a holiday and there was not much work pressure.

“But he did not come to the office on Saturday, nor did he take leave. When contacted on his official mobile number, he did not catch the ring. ”

Sheikh Sohail Rana, brother of Sonia Mehzabin, owner of e-commerce platform e-Orange, was arrested in a case of embezzling TK 1,100 crore from customers.

The main accused in the case, Sonia, her husband Masukur Rahman, and the company’s chief operating officer (COO) Amanullah Chowdhury have been arrested and are in jail.

There are allegations that Sheikh Sohail Ranai used to run the e-Orange company even though there was no ownership or share in the paper.

BGB Director (Operations) Lieutenant Colonel Faizur Rahman said, “I have heard that a police officer has been detained at the Indo-Nepal border.

“However, the BGB has no links on this border. We are in touch with the BSF, the Indian border guard. ”

“However, we do not have any definite information,” said the Deputy Inspector General of Police.