Headlines
Redwan Rahman graduates from FilmdomThe local government minister has instructed to cut the road if necessary to remove the waterRequest to withdraw closure shop at night till EIDThe days of the Western monolithic world are over: PutinLeaders of Germany, France, and Italy in Kyiv to express solidarity‘Presidents of two countries call and pressurized Mbappé’Two U.S. citizens are thought to be missing or taken prisoner in UkraineCOVID: The technical committee suggested lifting some restrictionsPetrol prices hit record highs in the USCanada wants a stern warning against cigarettesThe task force to protect the mountains, demanded the formation of a speedy trial tribunalDepot fire: CID tries to find the cause on CCTVRussian passports are being issued in occupied UkraineFire on Parabat Express: Railroad to Sylhet is normal after 4 hoursAnother 24 children died in Mariupol, Ukraine said
Home More Court Nine judges of the High Court took the oath
Facebook
Twitter
WhatsApp
Print 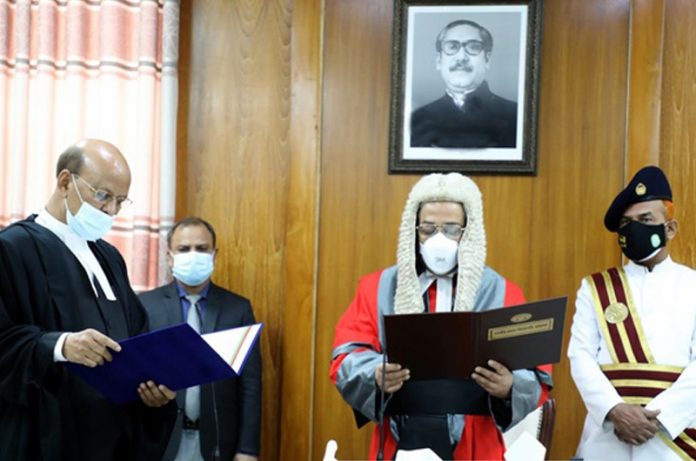 Staff Reporter: Nine permanent judges of the Supreme Court have been sworn in.

Chief Justice Syed Mahmud Hossain administered the oath of office to them at the Judges Lounge of the Supreme Court at 11 am on Tuesday.

The government on Monday issued a circular appointing nine judges who were appointed as additional two years ago. It is said that the appointment will be effective from the day of swearing-in.

They were appointed as additional judges on October 21, 2019.

With these nine, the number of permanent judges in the High Court Division stood at 91.

There are 5 judges in the Appellate Division of the Supreme Court including the Chief Justice.

Earlier, on May 30, 2016, 18 additional judges were appointed in the High Court. Later on May 29 last year they got a permanent appointments.

The swearing-in ceremony of nine judges was conducted by the Registrar General of the Supreme Court. Ali Akbar. Supreme Court officials were present on the occasion.