Headlines
Redwan Rahman graduates from FilmdomThe local government minister has instructed to cut the road if necessary to remove the waterRequest to withdraw closure shop at night till EIDThe days of the Western monolithic world are over: PutinLeaders of Germany, France, and Italy in Kyiv to express solidarity‘Presidents of two countries call and pressurized Mbappé’Two U.S. citizens are thought to be missing or taken prisoner in UkraineCOVID: The technical committee suggested lifting some restrictionsPetrol prices hit record highs in the USCanada wants a stern warning against cigarettesThe task force to protect the mountains, demanded the formation of a speedy trial tribunalDepot fire: CID tries to find the cause on CCTVRussian passports are being issued in occupied UkraineFire on Parabat Express: Railroad to Sylhet is normal after 4 hoursAnother 24 children died in Mariupol, Ukraine said
Home Sports On a record average, Guardiola said, all matches must be won
Facebook
Twitter
WhatsApp
Print 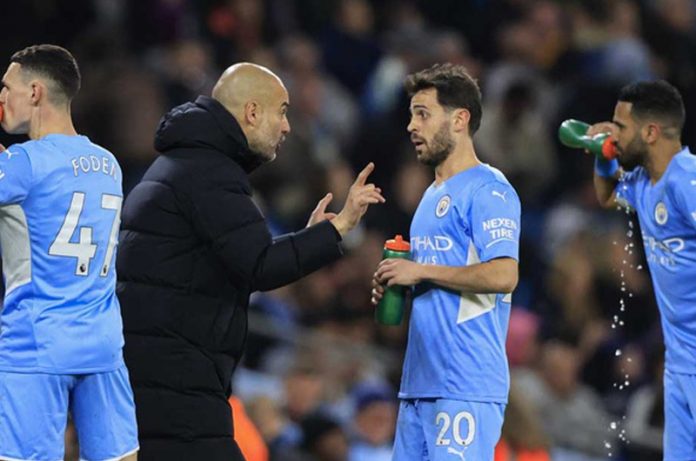 Sports Desk: Manchester City coach Pep Guardiola is delighted with the way the team has turned around in the second half after the opening fade against Brighton and Hove Albion. The team is back at the top of the league table. However, he thinks that in order to win the title, one has to maintain the continuity of great performance and win all the remaining matches.

The Manchester team won 3-0 on Wednesday night at the Etihad Stadium. All three goals were scored in the second half.

With this victory, City has returned to the top with 6 points in 32 matches. Liverpool dropped to second place with 8 points in the same match.

Guardiola set a great record for City’s last win on the road to the title. He has won 250 of the fewest matches for City among the top clubs in England.

The Spaniard took charge of the city in 2015. Since then, City has won 250 of 344 matches in all competitions.

After Guardiola, Jose Mourinho (396 matches) and Kenny Dalglish (429 matches) are at number two and three respectively.

After the record-breaking match, the former Barcelona coach praised the students as well as warned them. He said that the trophy went to Liverpool for their little forgetfulness.

“The feeling today (Wednesday) is that we are now mathematically qualified to play in tomorrow’s Champions League (live). People may say it’s normal, but it’s not. It will be clear if you look at the incredible teams in the race for a place in the Champions League. “

“We are not fools. If we lose just two points, Liverpool will be champions. If we can win all the matches, then we will be the champions. The players know that. “

Guardiola urged the team to continue their winning streak in the mission ahead.

“We know we have a tough match ahead of us, and we must try to perform as we do today (Wednesday) and win all the matches. If we can do that, we will celebrate (the title), otherwise we have to congratulate Liverpool. “