Headlines
Redwan Rahman graduates from FilmdomThe local government minister has instructed to cut the road if necessary to remove the waterRequest to withdraw closure shop at night till EIDThe days of the Western monolithic world are over: PutinLeaders of Germany, France, and Italy in Kyiv to express solidarity‘Presidents of two countries call and pressurized Mbappé’Two U.S. citizens are thought to be missing or taken prisoner in UkraineCOVID: The technical committee suggested lifting some restrictionsPetrol prices hit record highs in the USCanada wants a stern warning against cigarettesThe task force to protect the mountains, demanded the formation of a speedy trial tribunalDepot fire: CID tries to find the cause on CCTVRussian passports are being issued in occupied UkraineFire on Parabat Express: Railroad to Sylhet is normal after 4 hoursAnother 24 children died in Mariupol, Ukraine said
Home More Court Opportunity for Japanese mothers and Bangladeshi fathers to come to a ‘friendly...
Facebook
Twitter
WhatsApp
Print 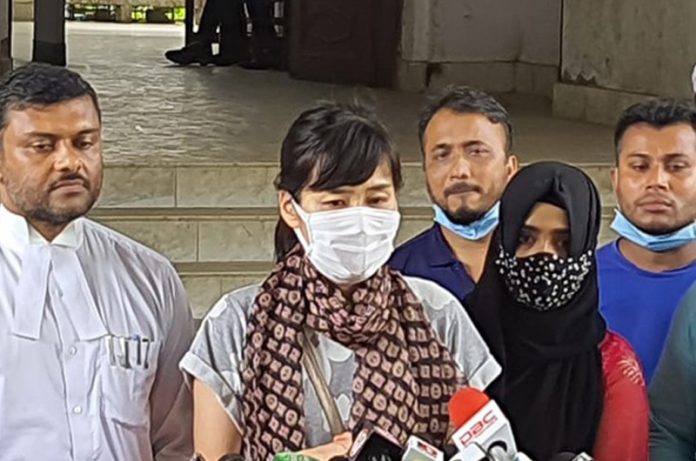 The children’s mother, Nakano Erico, is a Japanese citizen, and the father, Imran Sharif, is a U.S. citizen of Baladeshi descent.

The hearing of the writ petition of mother Nakano Erico seeking custody of the two children has been adjourned till September 28, and they have been asked to resolve the issue within this period.

And in the flat where there are children, the parents have been asked to stay with the children.

On the first day of the process, mother Nakano Erico will be with the two children from 8 am on Friday to 6 am on Saturday.

Baba Imran Sharif will be there from 8 am on Saturday to 6 am on Sunday.

Thus, Nakano Erico and Imran Sharif, who is in the process of separation, will have to take turns one day after another till September 28.

And to pay the flat rent at the same rate, Imran Sharif’s lawyer has been asked to provide a bank account to Nakano Erico.

During the order, senior judge of the bench Inayetur Rahim told the lawyers of both the parties, “We have adjourned till September 28. I hope you will come up with a better solution. ”

Addressing lawyer Rokanuddin Mahmud, the judge said, “We are very hopeful that you will settle the matter. You know everything at home and abroad. I hope you will be a mentor here. ”

Imran Sharif, the father of the children, and his sister Amina Jebin (the children’s uncle) were given the order. The court also banned Imran Sharif from leaving the country so that he could not leave the country with his two daughters.
On August 22, the Criminal Investigation Department (CID) rescued two children from Imran Sharif’s Baridhara home. Since then, they have been at the Metropolitan Police Support Center.

From there, the police took the two children to court on August 31.

The court issued the order on the same day after consulting with all parties after the request of their mother Erico and father Imran to keep the children in a better family environment.

In that order, they were asked to stay together with the two children for 15 days in a flat in Gulshan fixed by Imran Sharif.

The Deputy Director of the Dhaka Social Services Department was asked to take care of the matter. The Dhaka Metropolitan Police and the Criminal Investigation Department (CID) were asked to ensure the safety of children and parents.

But seven days later, on August 30, Nakano Erico’s lawyer applied to the court for a modification of the order.

After hearing the appeal on August 31, the High Court specified the issue of parents staying with children and spending time with them.

The court said that on the night of September 9, 11, 13, and 15, the mother will be with the girls in the house, the father will not be. The rest of the time both parents can stay with the children.

Moreover, if the parents want, they can go for a walk with the children. You can shop, you can go out to eat.

Following this, when the case came up in court on Thursday, both the parties filed a supplementary application.

One of the pleas at Mother Nakano Erico’s request was for parents to spend time with their children. However, the children’s father Imran Sharif’s lawyer Rokanuddin Mahmud objected.

But the court did not listen to his objections and ordered.

In this regard, Justice Enayetur Rahim said, “We wanted a mutual understanding. Even then, since it was not happening, we ordered to stay in phases. ”