Headlines
Redwan Rahman graduates from FilmdomThe local government minister has instructed to cut the road if necessary to remove the waterRequest to withdraw closure shop at night till EIDThe days of the Western monolithic world are over: PutinLeaders of Germany, France, and Italy in Kyiv to express solidarity‘Presidents of two countries call and pressurized Mbappé’Two U.S. citizens are thought to be missing or taken prisoner in UkraineCOVID: The technical committee suggested lifting some restrictionsPetrol prices hit record highs in the USCanada wants a stern warning against cigarettesThe task force to protect the mountains, demanded the formation of a speedy trial tribunalDepot fire: CID tries to find the cause on CCTVRussian passports are being issued in occupied UkraineFire on Parabat Express: Railroad to Sylhet is normal after 4 hoursAnother 24 children died in Mariupol, Ukraine said
Home More Court Parimani fell ill and lay down in the courtroom
Facebook
Twitter
WhatsApp
Print 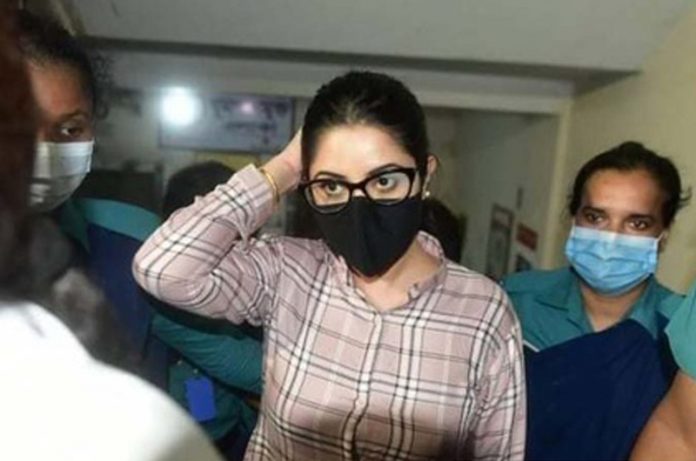 Court Reporter: Parimani, a popular actress of Bengali films, fell ill in the courtroom after falling ill while appearing in court in a drug case.

Parimani appeared in the court at around 2.15 pm and sat on the bench in front of the court. He looked sick; The lawyer also reported the illness.

When the court proceedings started at 2:12 am, Parimani got up from the bench and went to the fence. Was fidgeting during the hearing; Occasionally removing the mask and breathing. At the end of the hearing, the court granted his application.

Later, he got out of the court and stood in front of the next court. There, media workers gathered to take pictures and videos of the bride. Police tried to reduce the crowd from there.

Later, Parimani went inside the court again. Going there, Parimani fell ill; Khalu Kabir sits with his head on Hawladar’s feet. After pouring water on his head, at one stage he lay down on the bench. When she felt a little better, she left the court.

Allegations of contempt of court against the Parimani

Dhaka Metropolitan Public Prosecutor Abdullah Abu has accused his girlfriend of showing contempt of court for not appearing in court at the scheduled time of the hearing.

He said the hearing was scheduled to be held at around 12:30 pm in the Banani police station’s drug case filed against his girlfriend. But Parimani did not appear in court even after 1 pm.

Additional police were deployed at the court for his safety. Her lawyer then applied for the hearing to be postponed. The court fixed the time of the hearing around 2.30 pm.

Earlier, when Parimani appeared in the court at around 2.15 pm, the hearing of the case started at 2.12 pm.

At first, her lawyer Nilanjana Rifat Survi applied for bail on behalf of her, saying, “She is a film actress. Many movies have been contracted. Participating in the shooting.

“Earlier, he was granted bail in the case. He did not violate any condition of bail. We will not violate the bail conditions again. ”

Opposing bail, prosecutor Abdullah Abu said, “He has not been granted permanent bail. Huge quantities of drugs were recovered from him. Bail is not usually granted in such cases. Even then, the Metropolitan Sessions Judge granted him bail. The investigation has proved the allegations against the accused. I am opposing his bail. ”

Expressing anger against Parimani for not appearing in court on time, the state counsel said, “We came to the court at 12:30 pm. Even then, the accused did not come. He has shown disrespect to the court.

“It may be 5/10 minutes late to come to court. But it will be late for hours – it is not acceptable. No one here is extraordinary or ordinary – everyone is equal. Everyone has to remember that. ”

Nilanjana Rifat Survi expressed regret over her late arrival in court. The lawyer politely asked for his bail.

After hearing both the parties, the court granted bail to the Parimani.