Headlines
Redwan Rahman graduates from FilmdomThe local government minister has instructed to cut the road if necessary to remove the waterRequest to withdraw closure shop at night till EIDThe days of the Western monolithic world are over: PutinLeaders of Germany, France, and Italy in Kyiv to express solidarity‘Presidents of two countries call and pressurized Mbappé’Two U.S. citizens are thought to be missing or taken prisoner in UkraineCOVID: The technical committee suggested lifting some restrictionsPetrol prices hit record highs in the USCanada wants a stern warning against cigarettesThe task force to protect the mountains, demanded the formation of a speedy trial tribunalDepot fire: CID tries to find the cause on CCTVRussian passports are being issued in occupied UkraineFire on Parabat Express: Railroad to Sylhet is normal after 4 hoursAnother 24 children died in Mariupol, Ukraine said
Home More Court Parimoni got permanent bail
Facebook
Twitter
WhatsApp
Print 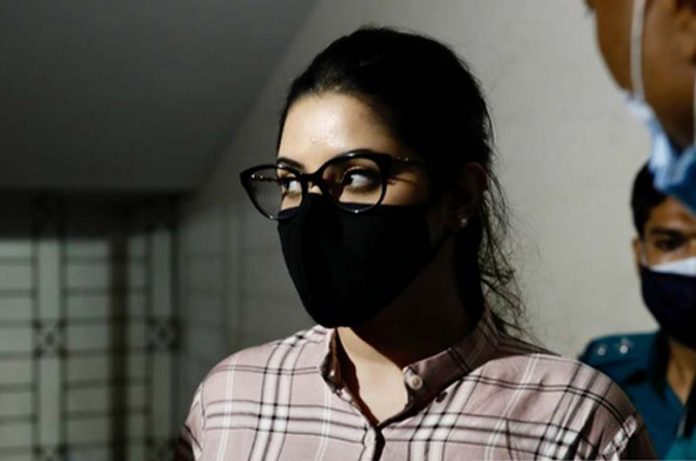 Parimani was on bail till the police report on the case. Sunday was the due date for the case after the police criminal investigation department filed the charge sheet.

Parimani applied for permanent bail in court through a lawyer. On the other hand, bail was opposed by the state.

After the hearing, Dhaka Metropolitan Magistrate Satyabrata Sikder accepted the charge sheet and granted bail to Parimani. Besides, the Metropolitan Sessions Judge ordered the transfer of case documents to the court for the next stage of the trial.

The court granted bail to Kabir Hossain along with his girlfriend among the three accused in the case. His girlfriend’s associate Ashraful Islam Dipu is on permanent bail in the case.

A case was registered against him under the Narcotics Act at Banani Police Station the next day after he was arrested in a raid on his girlfriend’s house in Banani, Dhaka on the night of August 4. The RAB’s seizure list includes the recovery of ‘alcohol and drugs like ice and LSD’ from Parimani’s house.

After the arrest, RAB spokesman Khandaker Al Moin said that the actress had a ‘mini bar’ in her flat. He drank regularly and organized ‘house parties’.

He said his girlfriend had a license to use alcohol, but said it had expired long ago.

Her bail was ordered on August 31 after the High Court questioned her over her repeated remand in custody following her arrest. The next day he was released from Kashimpur Jail in Gazipur.

After the investigation, on October 4, the Criminal Investigation Department (CID) of the police filed a chargesheet against the three, including his girlfriend.

After the news of a DB officer ‘spending 18 hours with the actress’s girlfriend came in the media, the investigation of the case went to the CID.

Narail’s daughter Shamsunnahar Smriti made her film debut in Dhaka in 2015 as Parimani. Since then, she has played the role of heroine in two dozen films.

A few months before her arrest, Parimani made a fuss over allegations of sexual harassment at the Dhaka Boat Club. Police have already filed charges against three people, including businessman Nasir Uddin Mahmud, in his case.