Headlines
Redwan Rahman graduates from FilmdomThe local government minister has instructed to cut the road if necessary to remove the waterRequest to withdraw closure shop at night till EIDThe days of the Western monolithic world are over: PutinLeaders of Germany, France, and Italy in Kyiv to express solidarity‘Presidents of two countries call and pressurized Mbappé’Two U.S. citizens are thought to be missing or taken prisoner in UkraineCOVID: The technical committee suggested lifting some restrictionsPetrol prices hit record highs in the USCanada wants a stern warning against cigarettesThe task force to protect the mountains, demanded the formation of a speedy trial tribunalDepot fire: CID tries to find the cause on CCTVRussian passports are being issued in occupied UkraineFire on Parabat Express: Railroad to Sylhet is normal after 4 hoursAnother 24 children died in Mariupol, Ukraine said
Home More Editors Choice People lost in the wreckage
Facebook
Twitter
WhatsApp
Print 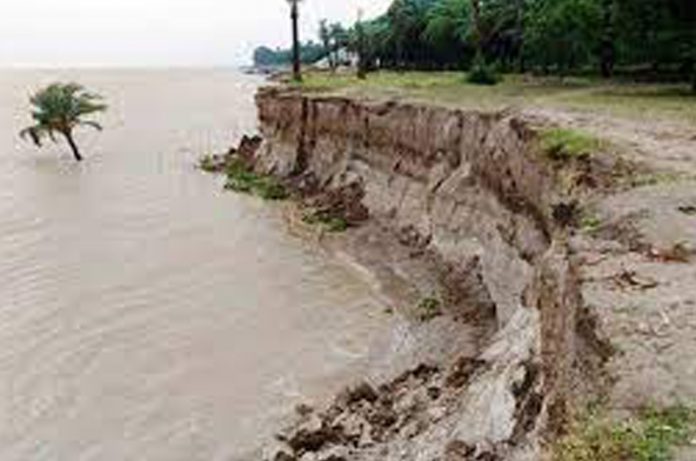 News Desk: Every year, floods occur in different parts of the country due to the mixing of rainwater with the mountain slopes coming down from the upper reaches. At this time, numerous people were also affected by river erosion. According to a report published, people in different parts of the country have lost their way due to severe erosion in Padma, Jamuna and Teesta.

In the last few days, hundreds of houses, schools, clinics, and other facilities in Rangpur, Nilphamari, Pabna, Goalanda in Rajbari, and Kalihati in Tangail have been washed away by the river. It is learned that at least 12 districts in the north and central parts of the country are currently flooded. In these districts, many people have lost their land due to floods and river erosion and have become destitute anew. Many of them are now living inhumane lives under the open sky. Many are trying to evacuate in fear of demolition. Four ferries at Rajbari are under threat due to the erosion of the Padma. The BIWTA has continued its efforts to prevent erosion there.

Farmers are worried as floods have hit different parts of the country. Because of the ingress of water in many areas, paddy, jute, and vegetables planted in the lowlands are sinking. Many pond fish have been washed away due to the floods.

A portion of the rainwater and mountain slopes of the neighboring countries flow through Bangladesh to the Bay of Bengal. Most of the water comes from the Brahmaputra-Jamuna. Besides, a lot of water also comes through Meghna Basin and Ganga-Padma. These waters are the major cause of floods and river erosion in the country. This time there have been floods in different states of Nepal and India. Therefore, if special precautionary measures are not taken, the damage due to floods and river erosion will increase. Urgent steps need to be taken to provide relief and rehabilitation in flood and river erosion-affected areas. The country experiences more or less flood every year. Therefore, if we are not prepared in this regard, the damage caused by floods and river erosion can not be prevented. The navigability of the country’s rivers has decreased. As a result, less water is causing more floods. In this situation, silt coming from upstream should be removed regularly and quickly through river excavation. The government has to pay attention to these. At the same time, importance should be given to the construction of sustainable dams.