Headlines
Redwan Rahman graduates from FilmdomThe local government minister has instructed to cut the road if necessary to remove the waterRequest to withdraw closure shop at night till EIDThe days of the Western monolithic world are over: PutinLeaders of Germany, France, and Italy in Kyiv to express solidarity‘Presidents of two countries call and pressurized Mbappé’Two U.S. citizens are thought to be missing or taken prisoner in UkraineCOVID: The technical committee suggested lifting some restrictionsPetrol prices hit record highs in the USCanada wants a stern warning against cigarettesThe task force to protect the mountains, demanded the formation of a speedy trial tribunalDepot fire: CID tries to find the cause on CCTVRussian passports are being issued in occupied UkraineFire on Parabat Express: Railroad to Sylhet is normal after 4 hoursAnother 24 children died in Mariupol, Ukraine said
Home Country Police did not come to Comilla on time, complained to the temple...
Facebook
Twitter
WhatsApp
Print 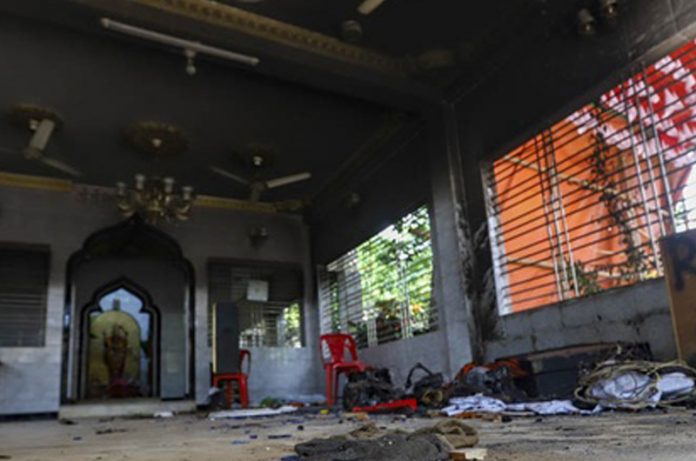 Md. Ashraful Islam: The puja mandapa on the banks of Nanua Dighi in the heart of Comilla town was attacked on Wednesday morning. The attack took place at around 11 am at the Chandamani Kali temple in the city.

The leaders of the temple committee said that the temple was attacked in three phases from 11 a.m. to 3 p.m., but the police did not call for help for a long time.

Two other temple committees in the city have also complained of not getting police assistance.

“The Chandamani Kali temple was set on fire with a ladder. The police did not come there for four hours. ”

However, Comilla District Superintendent of Police Farooq Ahmed denied that the police did not go to the temple.

At a press conference held at the Comilla Deputy Commissioner’s Office on Thursday afternoon, the Superintendent of Police was asked about the allegations of the puja and temple committees.

Denying the allegations, he said, “The mandapas had perfect security. The Ansar were also on patrol. ”

The first attack took place on Wednesday morning at a puja mandapa on the banks of Nanua Dighi in the center of Comilla town, allegedly for insulting the Quran. Then other mandapas were also attacked.

As a result of this incident, more temples were attacked in different parts of the country.

About one kilometer away from Nanua Dighi, in the Chawkbazar area of ​​the city (Kapuriapatti) is a hundred-year-old Chandamani Rakshakali temple. The first attack took place there at 11 am.

Haradhan Chakraborty, general secretary of the temple committee, said, “Attempts were made to attack in the first phase. However, they could not enter through the gate. They tried to attack again around 12:30 pm. He relaxed for a while and left. At around 3 pm, they launched a final attack with ladders, hammers, and petrol, destroying everything and burning it. ”

Haradhan Chakraborty said, “I spoke to the inspector (investigation) of Sadar police station at around 11 am after the first attempt of attack. “Send the force,” he said. But that force did not come. ”

Haradhan then tried to contact the police again on the phone at around 2.30 pm, but he complained that it did not work.

Haradhan Chakraborty said, “After 3 o’clock, the attackers entered the temple with a ladder at the gate and went out without any trouble. In the evening, the deputy commissioner and police super came to the temple. The police superintendent kept some policemen and Ansar members on guard here. ”

The distance from Comilla Kotwali Model Police Station to Chandamani Temple is less than one kilometer. Chawkbazar police outpost is half a kilometer away. The police line is not too far, either.

Biplob Dhar, a member of the Chandamani temple committee, said that after the attack, the temple committee leaders contacted the police and local politicians from time to time, but they only heard the message of ‘police coming’.

“When the assailants finally came with the ladder, I called 999 myself. A woman picked up the phone. I said, save Madame Amago. He said, “Don’t worry, I’m taking action.” But in the end, all the brothers and sisters were killed. I couldn’t recognize Kaur, I couldn’t keep someone calm. ”

Resistance to the people of the neighborhood

Sajal Kumar Chanda, co-president of the Kaligachhtala temple committee on Salahuddin Road in the city, said their temple was attacked around 2.30pm. Earlier, he had called for police help several times. But no one came.

He said the youths of the neighborhood had come together to defend the temple.

Shilpi Chakraborty, a resident of the Masterpara area, said, “The boys of the neighborhood have resisted together.”

Rana Chakraborty, a young member of the Kaligachhtala temple committee, and Bappi Das said Ekramul Hossain Babu, a councilor in Comilla City Corporation’s Ward 8, was with them when they tried to stop the attackers. He was also repeatedly called the police. However, the police arrived after the attackers left.

Ekramul Hossain said, “During the chase-counter chase, the attackers hit him on the waist with bricks. He is now bedridden with back pain.

Meanwhile, he has heard that councilor Ekramul has also been accused in one of the cases of attack on the temple.

Asked about this, Ekramul said, “Someone called and told me to flee. But I can’t get out of bed now. ”

It was informed at the press conference that four cases have been registered so far in connection with the attack on the temple in Comilla. One of these has been filed under the Digital Security Act. Hundreds of unidentified persons have been accused in these cases. 41 people have been arrested in four cases.

Fayez Ahmed of Raghurampur, who posted a video of the Nanua Dighi temple on Facebook, was arrested from Manoharpur area on Thursday, it was informed at the press conference.

The deputy commissioner said, “Apart from Comilla, there were several isolated incidents in Daudkandi and Sadar South. No untoward incident has taken place anywhere else. ”