Headlines
Redwan Rahman graduates from FilmdomThe local government minister has instructed to cut the road if necessary to remove the waterRequest to withdraw closure shop at night till EIDThe days of the Western monolithic world are over: PutinLeaders of Germany, France, and Italy in Kyiv to express solidarity‘Presidents of two countries call and pressurized Mbappé’Two U.S. citizens are thought to be missing or taken prisoner in UkraineCOVID: The technical committee suggested lifting some restrictionsPetrol prices hit record highs in the USCanada wants a stern warning against cigarettesThe task force to protect the mountains, demanded the formation of a speedy trial tribunalDepot fire: CID tries to find the cause on CCTVRussian passports are being issued in occupied UkraineFire on Parabat Express: Railroad to Sylhet is normal after 4 hoursAnother 24 children died in Mariupol, Ukraine said
Home More Agriculture Potatoes rot in Rajshahi cold storage, fear of loss of TK 10...
Facebook
Twitter
WhatsApp
Print 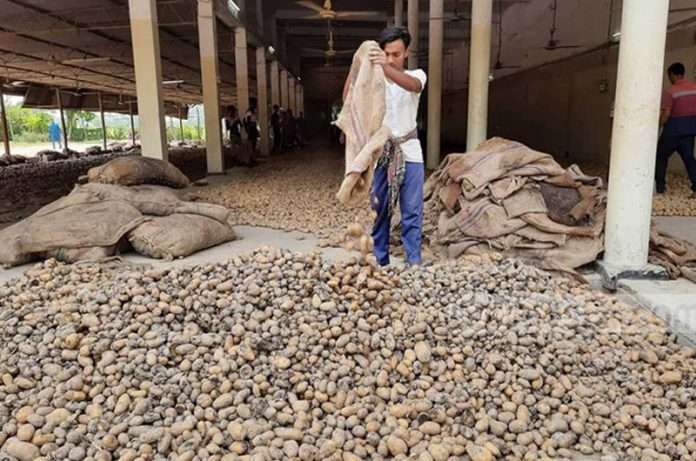 Rajshahi Representative: In Rajshahi, cold storage called Aman Cold Storage has rotted potatoes; So the farmers and traders are fearing a loss of about 10 crore Taka.

Manager Faruk Hossain could not say how many potatoes have rotted in the cold storage, even though he said that there are 50 kg potatoes in each of the one lakh and six thousand sacks.

Farmers and traders planted potatoes in this cold storage in Madanhati area of ​​Paba upazila of the district only a month ago. When the news of the decomposition spread on Wednesday morning, they demanded compensation for the position in front of the cold storage.

Local potato trader Kamrul Mia said, “At present, the price of a 50 kg bag of potato is 600 rupees. As such, if all the potatoes in the cold storage rot, the loss will be 9 crores 96 lakh taka. ”

Kamrul kept 7,000 sacks of potatoes, saying, “Now I know all my potatoes are rotten. Rotten potatoes are coming out of the sacks that are being opened. Rotting a potato in a sack means losing all the potatoes. These are no longer edible.

Rajshahi District Agriculture Officer Taufiqur Rahman said that the potatoes were rotting due to mechanical faults.

He said they would take necessary action if the victims applied for compensation. The administration will provide all kinds of assistance to the farmers in collecting the compensation.

Farm Mia, manager of the cold storage, said, “Potatoes can rot due to various reasons. Although the quality of potatoes is bad, it rots. I don’t know why it is rotten. The amount of decay has not been calculated yet. The owner has promised to pay compensation after calculation. ”