Headlines
Redwan Rahman graduates from FilmdomThe local government minister has instructed to cut the road if necessary to remove the waterRequest to withdraw closure shop at night till EIDThe days of the Western monolithic world are over: PutinLeaders of Germany, France, and Italy in Kyiv to express solidarity‘Presidents of two countries call and pressurized Mbappé’Two U.S. citizens are thought to be missing or taken prisoner in UkraineCOVID: The technical committee suggested lifting some restrictionsPetrol prices hit record highs in the USCanada wants a stern warning against cigarettesThe task force to protect the mountains, demanded the formation of a speedy trial tribunalDepot fire: CID tries to find the cause on CCTVRussian passports are being issued in occupied UkraineFire on Parabat Express: Railroad to Sylhet is normal after 4 hoursAnother 24 children died in Mariupol, Ukraine said
Home More Expatriation Presenting the identity card of the first woman ambassador of Bangladesh to...
Facebook
Twitter
WhatsApp
Print 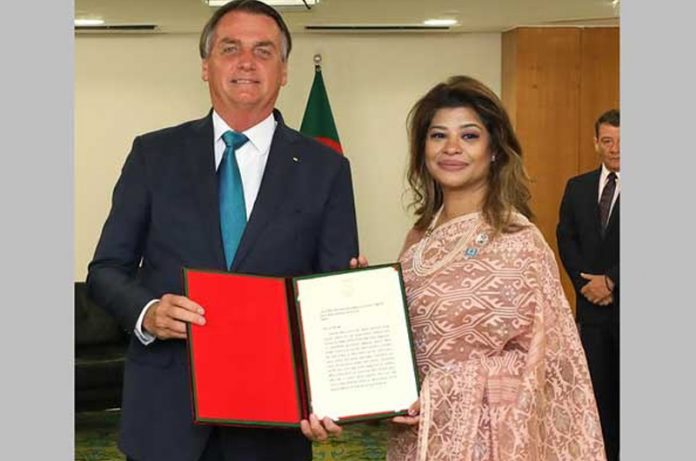 Md. Ashraful Islam: Sadia Faizunnesa has presented her credentials to President Zaire Bolsonaro as the first female ambassador to Brazil, Bangladesh’s only embassy in South America.

A press release issued by the Bangladesh Embassy said that senior officials including Brazilian Foreign Minister Carlos France were present at the event at the Presidential Palace Palacio Planaoto on Thursday.

Welcoming Ambassador Faizunnesa, President Bolsonaro congratulated the people of Bangladesh on the occasion of the golden jubilee of independence. Calling Brazil one of the world’s largest democracies, he said his administration was working to improve relations with all friendly countries.

On the occasion of the 50th anniversary of Brazil-Bangladesh diplomatic relations and the birth centenary of Father of the Nation Bangabandhu Sheikh Mujibur Rahman, Ambassador Sadia Faizunnesa greeted the President of Brazil on behalf of President Mohammad Abdul Hamid and Prime Minister Sheikh Hasina.

Balsorano directed the Foreign Minister to take steps to enhance Bangladesh-Brazil trade relations, especially cooperation in the agricultural sector. He also promised all kinds of cooperation to take the bilateral relations further.

Ambassador Sadia Faizunnesa conveyed the invitation of Prime Minister Sheikh Hasina to the President of Brazil to visit Bangladesh.

On the occasion of the ceremony, according to the diplomatic custom, Sadia Faizunnesa was given a guard of honor. Returning to his office, he paid homage to the Father of the Nation with flowers.