Headlines
Redwan Rahman graduates from FilmdomThe local government minister has instructed to cut the road if necessary to remove the waterRequest to withdraw closure shop at night till EIDThe days of the Western monolithic world are over: PutinLeaders of Germany, France, and Italy in Kyiv to express solidarity‘Presidents of two countries call and pressurized Mbappé’Two U.S. citizens are thought to be missing or taken prisoner in UkraineCOVID: The technical committee suggested lifting some restrictionsPetrol prices hit record highs in the USCanada wants a stern warning against cigarettesThe task force to protect the mountains, demanded the formation of a speedy trial tribunalDepot fire: CID tries to find the cause on CCTVRussian passports are being issued in occupied UkraineFire on Parabat Express: Railroad to Sylhet is normal after 4 hoursAnother 24 children died in Mariupol, Ukraine said
Home Headlines ‘Presidents of two countries call and pressurized Mbappé’
Facebook
Twitter
WhatsApp
Print 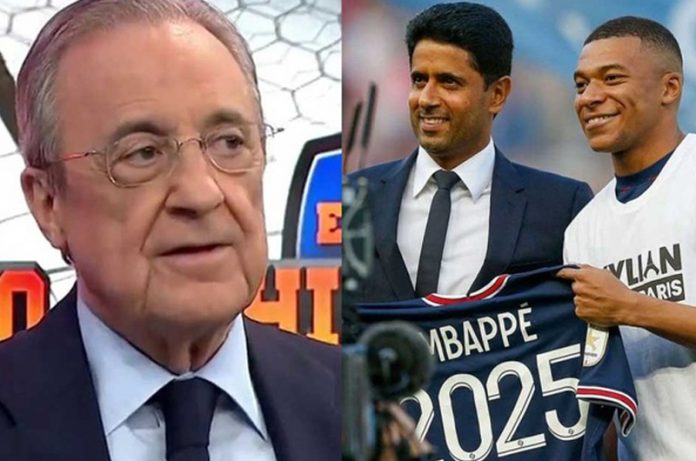 Sports Reporter: Real Madrid president Florentino Perez said talks with Killian Mbappé had gone too far. However, he quickly saw some changes in the French star. According to the Real president, the head of state of France and Qatar, and the mayor of Paris had called and pressured Mbappé to change his mind.

Mbappé’s new contract with PSG was one of the most talked-about events in the football world this year. The childhood dream club Real Madrid will come to Mbappé, many took it for granted. But after a few dramatic days, the picture changed. He extended his contract with PSG for three seasons.

Too many Real Madrid supporters, Mbappé, was then branded a “traitor.”

“It simply came to our notice then that he had not betrayed me. He told everyone about his desire to play for Real Madrid. She said it was her dream. They did not release him last August, and PSG did not accept our offer. “

“We are waiting (for the season to end). Mbappé has always said that his dream is to come to Real. But (probable time) 15 days ago everything changed. Political and economic pressures put some compulsions on him. We noticed this change in him. In a hurry, I saw a Mbappé who is not like before. The Mbappé I wanted to bring, this Mbappé is not like that. It was as if his dream had changed. “

The president of Real Madrid also gave an example of how intense that pressure was.

“He was called (Emanuel) Macron, there was a lot of pressure. Political pressure, the issue of two countries, is a lot of pressure for a 23-year-old man. For legal reasons, we could not pre-contract. Anyway, at least I didn’t go down without explaining myself first. It’s better to say, this is not my Mbappé. “

“It’s not uncommon for the presidents of the two countries to call. Even the mayor of Paris called. Then came such a tempting offer from Qatar. He was under pressure and chose the easy way out. It doesn’t occur to me how the President of France calls him! Can the King of Spain tell a footballer like this? The presidents of two countries, France and Qatar, have called and pressured him. “

Perez also claimed that Mbappé’s mother wanted to see her son at Real.

“Mbappé’s mother wanted her son to come to Real Madrid because she knows about her son’s childhood dreams. I did not talk to his mother. But I heard he was embarrassed. “

Perez is no longer interested in that Mbappé of a changed mindset due to stress. He also made it clear that as a footballer, the club’s values ​​would never be compromised.

“I still have affection for Mbappé. But no one is bigger than the club. We have some values ​​in this club that we never want to change. She sent me a message. But I already noticed that he had changed. “

The club president also said that the doors of Real Madrid have not been closed forever for Mbappé.

“The door of this club is never closed for any footballer who understands Real Madrid and understands the excellence of the club. I wish Mbappé all the best. He is a great footballer and will make many people smile. But no one is bigger than the club. ”