Headlines
Redwan Rahman graduates from FilmdomThe local government minister has instructed to cut the road if necessary to remove the waterRequest to withdraw closure shop at night till EIDThe days of the Western monolithic world are over: PutinLeaders of Germany, France, and Italy in Kyiv to express solidarity‘Presidents of two countries call and pressurized Mbappé’Two U.S. citizens are thought to be missing or taken prisoner in UkraineCOVID: The technical committee suggested lifting some restrictionsPetrol prices hit record highs in the USCanada wants a stern warning against cigarettesThe task force to protect the mountains, demanded the formation of a speedy trial tribunalDepot fire: CID tries to find the cause on CCTVRussian passports are being issued in occupied UkraineFire on Parabat Express: Railroad to Sylhet is normal after 4 hoursAnother 24 children died in Mariupol, Ukraine said
Home Headlines Prime Minister Sheikh Hasina insisted on repairing the global supply chain
Facebook
Twitter
WhatsApp
Print 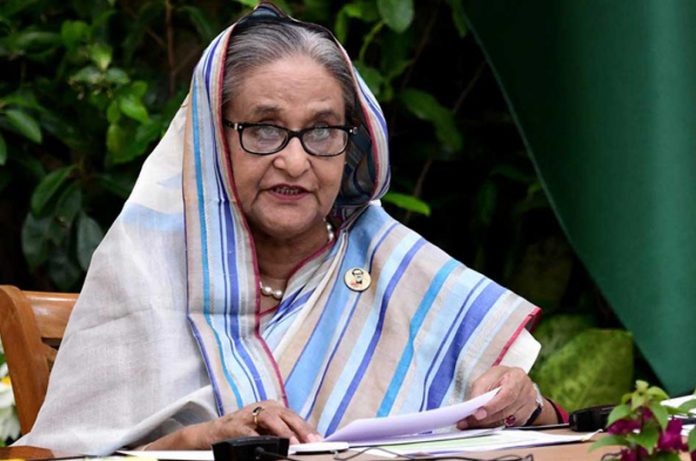 Staff Reporter: Even before the epidemic subsides, Prime Minister Sheikh Hasina has suggested that in a fragile world economy, the impact of the Ukraine war on the sudden rise in daily commodities should be given the utmost importance to the disrupted supply system.

He made the proposal while attending the first meeting of the Champion’s Group of Global Crisis Response for Food, Energy, and Finance with the UN Secretary-General on Friday night.

The Prime Minister thanked UN Secretary-General Antonio Guterres for inviting her to the meeting and said she was honored to be part of the prestigious Champions Group.

Sheikh Hasina said, “The Ukraine war has come at a time when the whole world is trying to come out of the Kovid-19 epidemic. This is putting a serious strain on the already fragile world economy. “

Presenting himself as a representative of the Global South in tackling the global financial crisis, he said, “I am bringing to this table the voices of millions of people who have suffered the most in this crisis.”

He said the least developed countries (LDCs) and developing small island nations (SIDs) were suffering the most. Specific arrangements need to be made to assist them in overcoming this situation.

At this time, the Prime Minister put forward four proposals expressing his views on tackling the crisis.

“First, we need to strengthen global solidarity and take concerted action. The G-7, G-20, OECD, and international financial institutions have a major responsibility in this regard.

“I am just happy to see that the steering committee of this group has all the major financial institutions. We will give them full support to make recommendations that can be implemented to address this crisis. ”

Elaborating on the second proposal, he said, “The immediate need is to address the disruptions in the global logistics and supply chain. This will help control the rising price of the product.

“There must also be international support for reviving global trade and export earnings, especially for the least developed countries and other vulnerable countries.”

In addition, developed economies and multilateral financial institutions need to come forward and have access to duty-free-quota-free markets and more readily available financial systems, he said.

In the third proposal, Sheikh Hasina said it was important to pay more attention to technical support and investment for the agricultural sector for effective food storage and distribution system.

“There are a lot of new opportunities in the renewable energy sector, especially in the LDCs (The Least Developed Countries) business,” he said.

He said the existing North-South, South-South, and tripartite cooperation could be enhanced to take these issues forward, adding that the issue of private sector involvement was becoming important.

Finally, as the President of the 47-member Climate Vulnerable Forum, the Prime Minister mentioned the opportunity to work for the developing small island nations (SID) and the low-risk countries at risk of climate change.

“Agriculture and food systems in those countries are under severe pressure,” he added.

“We want to share our knowledge, understanding, and experience in tackling the challenges of climate change, biodiversity loss, and environmental degradation for the benefit of others.”

He said, “Bangladesh is a firm believer in multilateralism. We have always responded to the call of the United Nations to contribute to global peace, stability, and development.

“It simply came to our notice then.

Sheikh Hasina said, “As a nation, we have a reputation for tolerance in the face of all the daunting challenges. The Kovid-19 epidemic is the latest example. “

Highlighting Bangladesh’s efforts to survive the epidemic, he said, “Our efforts to recover from the epidemic were marked by a careful balance between life and livelihood.

“We put the weakest people in front of us in our recovery efforts. We have expanded the areas of social security to help those who are most backward. ”

“Taking timely steps to buy the vaccine has averted a major health crisis and saved lives,” he said.

Highlighting realistic initiatives to support the export sector and small and medium enterprises (SMEs), the Prime Minister said a 23 billion incentive package would be launched.

He said that due to these measures, GDP growth of more than 6 percent has been achieved.

Stating that Bangladesh has achieved self-sufficiency in food production and ensured energy security, Sheikh Hasina said, “However, Ukraine has made the war situation extremely unstable.

“Shortages of supplies and abnormal rise in prices of food, fuel, and other commodities have already put a severe strain on the lives of ordinary people.”