Headlines
Redwan Rahman graduates from FilmdomThe local government minister has instructed to cut the road if necessary to remove the waterRequest to withdraw closure shop at night till EIDThe days of the Western monolithic world are over: PutinLeaders of Germany, France, and Italy in Kyiv to express solidarity‘Presidents of two countries call and pressurized Mbappé’Two U.S. citizens are thought to be missing or taken prisoner in UkraineCOVID: The technical committee suggested lifting some restrictionsPetrol prices hit record highs in the USCanada wants a stern warning against cigarettesThe task force to protect the mountains, demanded the formation of a speedy trial tribunalDepot fire: CID tries to find the cause on CCTVRussian passports are being issued in occupied UkraineFire on Parabat Express: Railroad to Sylhet is normal after 4 hoursAnother 24 children died in Mariupol, Ukraine said
Home Entertainment Protesting naked on the Cannes rug
Facebook
Twitter
WhatsApp
Print 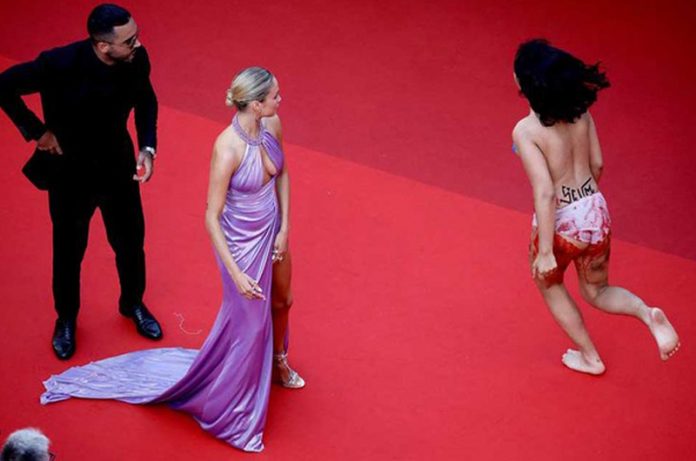 Entertainment Desk: The shadow of the Ukraine war is also at the Cannes Film Festival.

On Friday, while the stars of ‘Three Thousand Years of Longing’ were walking on the red carpet, a young woman came down naked.

According to Reuters, the body of the unnamed young woman was red with the color of the Ukrainian flag. It read, “Stop raping us.”

Idris Elba and Tilda Swinton, the stars of ‘Three Thousand Years of Longing’, who were walking there when the almost naked girl fell down on the red carpet, felt uneasy.

The young woman shouted and said something, the security guards immediately wrapped the young woman in a jacket and took her away.

Since the start of the Ukraine-Russia war, its shadow is falling on various festivals. Ukrainian President Volodymyr Zelensky also gave a video speech at the opening ceremony of this year’s Cannes festival in France.