Headlines
Redwan Rahman graduates from FilmdomThe local government minister has instructed to cut the road if necessary to remove the waterRequest to withdraw closure shop at night till EIDThe days of the Western monolithic world are over: PutinLeaders of Germany, France, and Italy in Kyiv to express solidarity‘Presidents of two countries call and pressurized Mbappé’Two U.S. citizens are thought to be missing or taken prisoner in UkraineCOVID: The technical committee suggested lifting some restrictionsPetrol prices hit record highs in the USCanada wants a stern warning against cigarettesThe task force to protect the mountains, demanded the formation of a speedy trial tribunalDepot fire: CID tries to find the cause on CCTVRussian passports are being issued in occupied UkraineFire on Parabat Express: Railroad to Sylhet is normal after 4 hoursAnother 24 children died in Mariupol, Ukraine said
Home Headlines Public testing begins to identify covid in Chaoyang, Beijing, as infection spreads
Facebook
Twitter
WhatsApp
Print 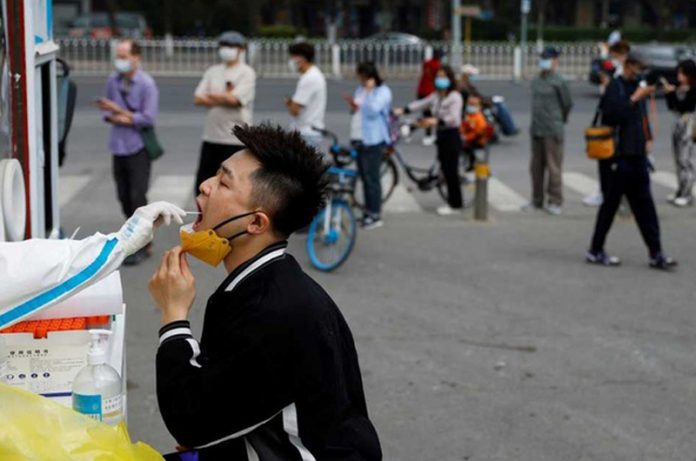 News Desk: Authorities in the Chinese capital, Beijing, have launched a mass trial in one of their districts to see the rise of covid patients.

Over the weekend, 26 COVID patients were identified in Chaoyang District; According to the BBC, this is the highest number of patients identified in the recent outbreak in Beijing.

There is enough food – despite such assurances from the government, long queues of people have been seen outside various supermarkets since the announcement of the mass polls.

Residents of the Chinese capital are also worried about whether the situation will gradually become like that of Shanghai in the wake of the outbreak.

As many as 2.5 billion people in Shanghai, one of Asia’s most important economic hubs, have been under house arrest for the past few weeks.

A total of 3.5 million residents of Beijing’s most populous district will have to undergo a total of three identification tests, according to a statement from the Chaoyang Prevention Team.

As soon as this notification was received, the residents of the district rushed to the supermarket to collect more daily necessities.

Crowds were seen at the empty shelves and check-out counters of the supermarket in the pictures of the local media.

To address the situation, all of Beijing’s major supermarkets have announced plans to extend their opening hours.

Companies have been instructed to increase the supply of products such as vegetables, poultry eggs, and meat, according to the Global Times.

China’s state-run media quoted health experts as saying that a public examination in Chaoyang would give an idea of ​​where the level of restrictions should be raised.

Pang Jinghuo, deputy director of the Center for Disease Control and Prevention in Beijing, told another state-run China Daily that he expects the number of covid patients to increase in the Chinese capital in the coming days.