Headlines
Redwan Rahman graduates from FilmdomThe local government minister has instructed to cut the road if necessary to remove the waterRequest to withdraw closure shop at night till EIDThe days of the Western monolithic world are over: PutinLeaders of Germany, France, and Italy in Kyiv to express solidarity‘Presidents of two countries call and pressurized Mbappé’Two U.S. citizens are thought to be missing or taken prisoner in UkraineCOVID: The technical committee suggested lifting some restrictionsPetrol prices hit record highs in the USCanada wants a stern warning against cigarettesThe task force to protect the mountains, demanded the formation of a speedy trial tribunalDepot fire: CID tries to find the cause on CCTVRussian passports are being issued in occupied UkraineFire on Parabat Express: Railroad to Sylhet is normal after 4 hoursAnother 24 children died in Mariupol, Ukraine said
Home Headlines Putin spoke on Victory Day, but did not signal a “catastrophe.”
Facebook
Twitter
WhatsApp
Print 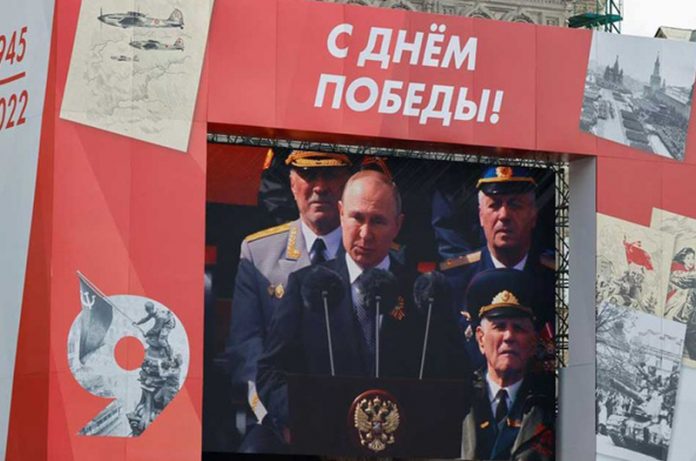 International Desk: In his World Victory Day speech on World War II, President Vladimir Putin sent a message of “doom” to the West, but many did not.

In a speech at the Victory Day parade in Moscow’s Red Square on Monday, Putin made no major announcements.

According to the BBC, in his speech, the Russian president sought to justify Russia’s attack on Ukraine, saying that NATO and Ukraine were creating threats on the Russian border that were “unacceptable” to Moscow. He also claimed that Russian fighters were now fighting for the country’s security.

“You are fighting for your motherland,” he said. The death of every army officer is painful for us. The state will do everything to take care of their families. ”

He greeted the ex-servicemen with experience in fighting for the ‘Great Victory’. Russia celebrates Adolf Hitler’s victory over the former Soviet Union over Nazi Germany in World War II.

He asserted that Russia’s “special military operation” in Ukraine was necessary and “timely”. He described it as the “right decision” of an independent, strong, sovereign state.

Putin said Russia has been at loggerheads with NATO and other European countries over the past few years.

“Russia has called on Europe for a fair compromise, but they have not listened to us. Instead, they were preparing to launch a punitive operation in the eastern part of Ukraine. Russia is now conducting operations there, “he said.

“In Kiev, they started saying that they could get nuclear weapons, and Neto started approaching our territory. It became a clear threat to our country and our borders. Everything told us that a war was needed. “

“The West is preparing to occupy our land, including Crimea,” he said.

Putin then called for a minute of silence for Russian troops killed in World War II and in exile.

After his speech, thousands of troops in Moscow’s historic Red Square cheered. The cannon was then fired and the Russian national anthem was played.