Headlines
The local government minister has instructed to cut the road if necessary to remove the waterRequest to withdraw closure shop at night till EIDThe days of the Western monolithic world are over: PutinLeaders of Germany, France, and Italy in Kyiv to express solidarity‘Presidents of two countries call and pressurized Mbappé’Two U.S. citizens are thought to be missing or taken prisoner in UkraineCOVID: The technical committee suggested lifting some restrictionsPetrol prices hit record highs in the USCanada wants a stern warning against cigarettesThe task force to protect the mountains, demanded the formation of a speedy trial tribunalDepot fire: CID tries to find the cause on CCTVRussian passports are being issued in occupied UkraineFire on Parabat Express: Railroad to Sylhet is normal after 4 hoursAnother 24 children died in Mariupol, Ukraine saidBelayet, who is in his fifties, has been given a good admission test against young
Home More Politics Quader wants the BNP leaders to resign for the failure of the...
Facebook
Twitter
WhatsApp
Print 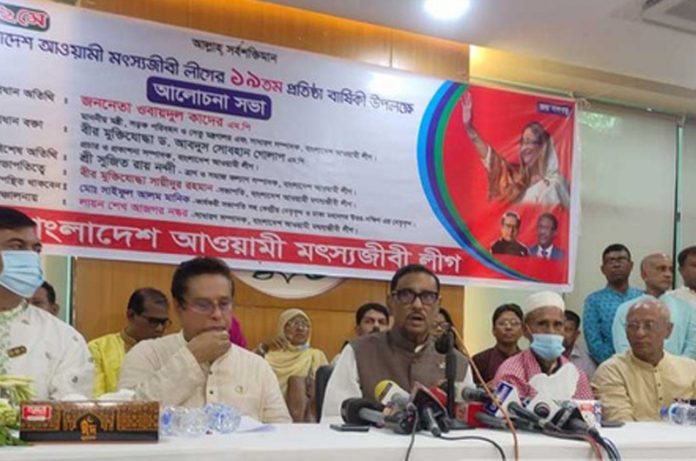 Staff Reporter: Awami League general secretary Obaidul Quader has said that BNP leaders should resign for failing in the movement.

He said this while addressing the 19th founding anniversary of Matsyajibi League at the central office of the Awami League on Sunday.

He said, “BNP leaders failed in the movement, failed in the election. They should resign top to bottom today. Sheikh Hasina has success. They (BNP leaders) failed. They will resign for failing.

“A successful Prime Minister, he is in power at the behest of the people of Bengal. It is still 90 per cent out of 100 per cent in popularity. Are at the peak of popularity. Has been praised all over the world, is being praised. “

Commenting on the BNP’s ‘fire of terror’, Quader said, “People of this country have not forgotten. How many people have been burnt in the fire? Fire to the bus. Bus driver, CNG driver, who set fire to the parked bus? BNP. They talk big today.

Awami League general secretary Obaidul Quader has said that elections are the only way for the BNP to change its government.

Although the BNP has announced that it will not go to the polls under the ruling party, the general secretary of the Awami League said, “The people of the country are fine, the BNP is upset.” If people are good, BNP is upset; Sheikh Hasina’s development irritates BNP. The Padma Bridge will be inaugurated next month. When someone says this, his face turns black. ”

Addressing the BNP secretary-general, he said, “There is no point in shouting and shouting Mirza Fakhrul Saheb. There is no alternative to leaving power without elections. Therefore, if the government wants to change, it will have to come to the polls. Come straight, don’t go crooked. They have also lost their popularity by terrorizing. ”